Due to the Coronavirus the USET Foundation at Hamilton Farm will be CLOSED TO THE PUBLIC until further notice! 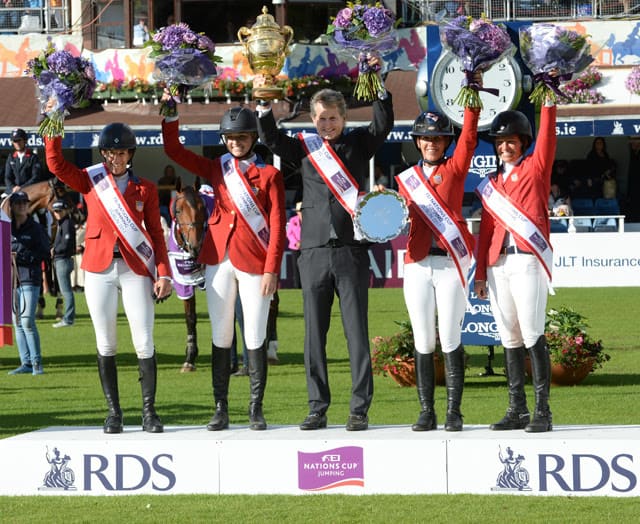 In the closing stages the Netherlands and France threw down a challenge, and American anchor Laura Kraut (51) was under pressure when last to go with Confu. But the double-Olympian didn’t crumble, posting the second US double-clear of the competition to seal it ahead of the runners-up from France, while the Dutch slotted into third place.

This was the first all-female team triumph in the 91-year history of Nations Cup Jumping for the world-famous Aga Khan Cup in Dublin.

“We said at the beginning of the year this was one of the shows we are bringing our “A” team to,” explained Chef d’Equipe Robert Ridland. “It’s our view that the Aga Khan is the greatest trophy in our sport. And more than that there are many ways to win a Nations Cup, sometimes you get lucky, but today in my view there was no luck. These four riders did an unbelievable job!”

The time-allowed of 80 seconds proved difficult for many over Irish course-builder Tom Holden’s track, and a speedy turn to the final oxer was often costly. Beezie Madden’s (53) mistake here with her new ride Darry Lou was the American drop score in round one, but the pair got it absolutely right in round two after pathfinders Lauren Hough (40) and the brilliant mare Ohlala produced their second clear of the day and rising talent Lillie Keenan (20) made her only mistake at the first element of the penultimate double with Super Sox.

Kraut clinched it with a crisp, clear run to leave a five-fault margin between the winning U.S. side and the French in second while the points earned by the third-placed Dutch, whose final tally was just seven faults, saw them overtake Italy at the top of the Europe Division 1 leaderboard at the end of the eight-leg series.