Competition began with a qualification round on Wednesday, September 22, for both teams, with the junior team jumping at 1.40m height and the young riders contesting a 1.45m track. The U.S. Junior Jumping Team qualified for the second and final round of competition in third place in CSIOJ team competition, with strong performances from Viriginia Bonnie (Upperville, Va.) and Efodea, an 11-year-old KWPN mare owned by Nina Bonnie, Ansgar Holtgers Jr. (Wellington, Fla.) and Elina, and a 12-year-old KPWN mare owned by Gut Einhaus, LLC, Caroline Mawhinney (Woodside, Calif.) and Stella Levista, her own 13-year-old Hanoverian mare, and Zayna Rizvi (Wellington, Fla.) and Excellent, an 11-year-old Dutch Warmblood gelding owned by Peacock Ridge LLC. The team finished on a total score of four but would begin with a clean slate of zero for the second round of competition on Saturday.

The U.S. Young Rider Team also qualified for the second round of competition in the CSIOY, finishing in sixth place after the first day. The team of Tali Dejong (Golden, Colo.) and Heavenly Star, her nine-year-old KWPN mare, Riley Delbecq (Duck Key, Fla.) and Julesraimus de Barisy, her own 12-year-old Belgian Warmblood gelding, Mimi Gochman (New York, N.Y.) and Celina BH, an 11-year-old Holsteiner mare owned by Gochman Sport Horses, and Caelinn Leahy (Maple Park, Ill.) and Cold Play 31, a 12-year-old Westphalian gelding owned by Steven Schaefer, each had highlights in their rounds.

The U.S. Junior Jumping Team returned for the second round on Saturday, September 25, in firing fashion, with Mawhinney and Bonnie both securing clear rounds for the team and Holtgers Jr. and Rizvi only adding four faults to their individual scores. Dropping one of the four-fault tallies, the team finished the competition on final team score of four, securing a first-place finish. Spain took second place with a total score of five, with Belgium earning the bronze, also with a total score of five. Of their podium success, Kursinski commented noted that the team’s performance and learning from the experience will be beneficial for the continued development of the program pipeline.

“The Juniors were extremely motivated and focused. It was really a great experience for them. We qualified in the top sixth and on Saturday, they all came back and were very strong. It was great to watch,” said Kursinski. “They rode well, the horses jumped well, and the best thing is truly experiencing the team experience. At home it’s always individual, but to represent the United States internationally, you really feel it. There were 12 international teams and for them to be out there representing their country and feeling proud of their accomplishments reinforces the model that we’ve seen work for our program. For the future success, it’s about getting them started earlier and into this international environment.”

The U.S. Young Rider Jumping Team returned on Saturday looking to improve on their performance from Wednesday. The team finished on a final score of nine, for sixth place in the CSIOY team competition, and saw Gochman ride to fault-free rounds across both team competition classes. Dejong and Heavenly Star finished on a total score of four, while Delbecq and Julesraimus de Barisy added a single rail and one time fault to their second-round total. Leahy and Coldplay 31 had three down for 12 faults and were the drop score for the team. Germany finished in first place on zero faults, with France taking second on four. Sweden earned the bronze with eight faults to round out the top three placings.

“Overall, this team was great, and we just missed the podium by a time fault. It was a tremendous experience for all of them, especially to learn how to deal with their nerves – and there will continue to be learnings from it,” added Kursinski. “Across the board, they’re all taking home an understanding of what they must work on and continue to improve. It’s a wonderful experience and the competition was very strong, and that’s a part of why we invest in bringing future talent to these competitions and why it’s so important for them to experience the successes during the week too.”

Gochman and Celina BH delivered all clear rounds throughout their week of competition and captured top honors in the Ashford Farm Grand Prix CSIOY in impressive fashion, crossing through the jump-off timers in 42.08 seconds for the win, nearly two seconds faster than the second-place finisher. Holtgers Jr. and Conblue, an 11-year-old Oldenburg Springpferd gelding, took second place in the Emmers Equestrian Park Grand Prix CSIOJ, with the pair finishing in 42.65 seconds, just narrowly behind Aurelia Guisson and No Limit vh Legita Hof Z of Belgium who took the win. Rizvi and Excellent, rounded out the top five in the class, adding four faults in their jump-off round and finishing with a time of 42.67 seconds. 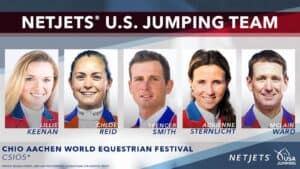 By US Equestrian Communications Department US Equestrian is pleased to announce the athletes selected to represent the NetJets U.S. Jumping Team for the CHIO Aachen to be held in Aachen, 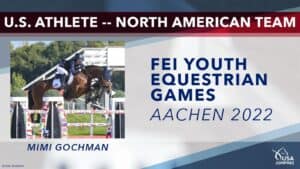 By US Equestrian Communications Department US Equestrian is pleased to announce the selection of Mimi Gochman (New York, N.Y.) as the U.S. representative for the FEI Youth Equestrian Games 2022. 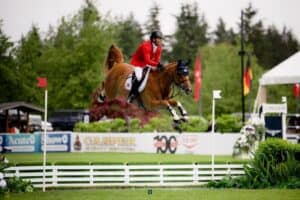 By US Equestrian Communications Department The NetJets U.S. Jumping Team challenged the rain to finish fifth in the Longines FEI Jumping Nations Cup of Canada CSIO5*. Team Ireland finished in 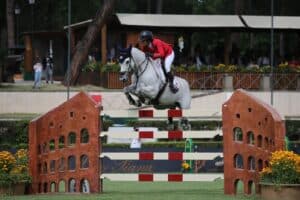 By US Equestrian Communications Department The NetJets U.S. Jumping Team finished just off the podium with a two-round total of eight faults in the FEI Nations Cup of Rome CSIO5* 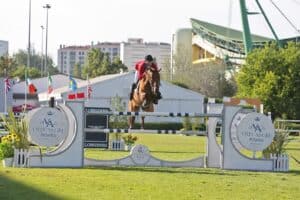 By US Equestrian Communications Department The U.S. Jumping program was in action across Europe today, with a four-member CSIO5* team in Rome, Italy, and a four-member team in Lisbon, Portugal 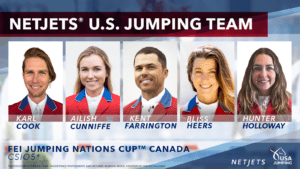 By US Equestrian Communications Department US Equestrian is pleased to announce the athletes selected to represent the NetJets U.S. Jumping Team at the Longines FEI Jumping Nations Cup Canada CSIO5*