To Michael Page, Winning Isn’t the Only Thing | USET Foundation

To Michael Page, Winning Isn’t the Only Thing

The two-time Olympic medalist is still teaching young athletes what matters most: a passion for riding and a boundless desire to get better.

Michael Page was 100 yards from the finish line of his 1964 Tokyo Games steeplechase ride when he was unexpectedly forced to make a split-second decision — one that would determine his Olympic fate.

His horse, Grasshopper, had been gradually slowing down, the result of a vexing knee injury that had hampered the duo’s training and compromised the gelding’s conditioning.
Now, Michael would have to choose: Push his mount and take his chances? Or let the horse make the rules and see what would happen?
Deep in his heart, Michael knew what he had to do. Grasshopper was in charge.

Grasshopper not only crossed the finish line, he showed new strength in the next phase of competition, a muddy cross-country course that was a comfort to his bum knee.

The duo performed like the champions they were — “He was like, ‘Just shut up and steer,’” Michael recalls — and brought home a team silver in eventing.

“If I’d done anything with him, we’d have had no medal,” Michael says. “I’m lucky to think back to that Olympics. They were great. You get those moments.”

Today, Michael still rides every day and teaches at the Kent School in Kent, Conn. He reflects on his career with joy, gratitude and at least a little bit of surprise. And for young riders dreaming of the success he enjoyed, Michael has some simple advice: Love riding more than you love winning.

Michael Page on The Art of a Good Ride

But he says he was never motivated by competition. For Michael, riding was always about just that — riding.

“I wanted to ride well,” Michael says. “If I didn’t ride, that was what bothered me. You get more opportunities when the first thing you want to do is get better. If you focus on winning, someone will beat you.”

He credits his father, Owen, with nurturing his passion. When Michael was 15, his dad sent him to England so he could train and improve. When Michael was 17, Owen recognized that his son had more passion for horses than for school. He sent him back to Europe for more training — this time, at the exceptionally rigorous French cavalry school.

Soon after, Michael joined the U.S. Army and received orders to go to California. “I lived at Pebble Beach and rode horses every day,” he remembers. “I loved the Army and the Army seemed to think my experience as a rider would continue the history of Army participation in the Olympics.”

By the time the U.S. Equestrian Team offered Michael a ride on the finicky Grasshopper, he was well-prepared for what would turn out to be the ride of his life.

When Michael was competing, the USET provided the coaching, the facilities and the horses for its riders, who all lived at Hamilton Farm in Gladstone, N.J.

That unique environment did more than help make Michael a champion — it helped him find the love of his life. In 1966, Michael met Foster’s new groom, Georgette.

“The very best thing to ever happen to me was to walk into the barn and see her sitting on that trunk,” Michael shared with The Chronicle of the Horse in 2017.

A plaque on a stall at Hamilton Farm names Michael’s two best horses, Grasshopper and Foster, and lists their many accomplishments. At the bottom of the plaque, a simple inscription commemorates the day Michael and Georgette met: “Best day of my life. Georgette Page. 12/15/66.”

“I mean, how lucky can you be?” Michael says.

The Future of America’s Team

Of course, Michael is as sharp as ever when it comes to identifying equestrian talent and knowing what it takes to succeed.

Even though many aspects of the sport have evolved since his days as a competitor, Michael says some basics will never change.

“You gotta be good,” he says. “Getting handed everything isn’t going to make you better than someone who had to sweat. At the very top, it’s the ones who sacrifice the most.”

And even the best and hardest working riders need the backing of family members, sponsors and USET Foundation supporters like you, Michael says.

“Money goes, not just to top riders, but to the younger riders as well — and they wouldn’t have the opportunities otherwise,” Michael explains. “The Team is in a good position. Good people are trying to assist the riders and give them the opportunity to perform on the biggest stages.”

Michael will be paying special attention when some of those athletes head to Tokyo for the Summer Games next year – the same place he made history in 1964.

Perhaps someday a few of the young riders Michael teaches at the Kent School will ride for America’s Team, capping an extraordinary legacy that spans nearly six decades.

“I hope I will be able to influence young riders coming along because of the great people I’ve learned from, the places I’ve been, the opportunities I’ve had,” says Michael. “And here I am. I get to ride every day, the sun is shining, and I feel great.” 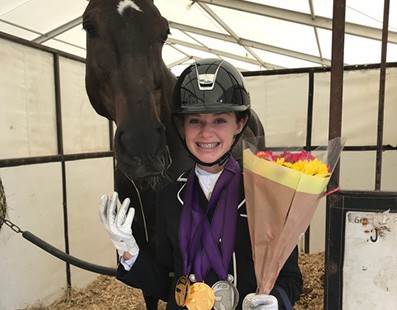 At just 15 years old, Annie is a North American champ poised for even greater success — and she’s also a thriving businesswoman. 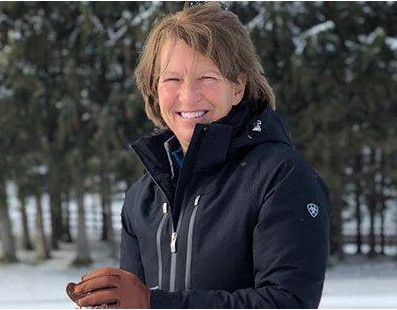 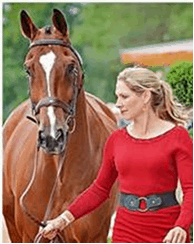 Once the world’s top female endurance racecar driver, Liz Halliday-Sharp is now steering toward a new career goal: competing for the U.S. Equestrian Team in the 2021 Olympics.

PrevPreviousAnnie Klepper: Dressage Superstar by Day, Designer by Night
NextMcLain Ward: Class Act, In and Out of the RingNext