Lexington, Ky. – A talented group of athletes demonstrated their skills over two days of competition at the 2020 Platinum Performance/USEF Show Jumping Talent Search Finals – West at Rancho Mission Viejo Riding Park in San Juan Capistrano, Calif. Once the final phase concluded on Sunday, 15-year-old Skylar Wireman was declared the champion. Wireman (Bonsall, Calif.) was able to climb to the top of leaderboard with the help of Hot Pants, Haven Farms’ 22-year-old KWPN gelding, as she demonstrated her abilities in each phase.

On the first day of competition, judges Mandy Porter (Encinitas, Calif.) and Julie Winkel (Reno, Nev.) tested riders’ skills on the flat in Phase I with movements such as counter-canter, turn-on-the-forehand, and sitting trot. Fifteen-year-old Parker Cliff (Folsom, Calif.) topped Phase I with a score of 90.0 aboard Fanadwest Rebel, her 14-year-old Irish Sport Horse gelding.

For Phase II, judges Porter and Winkel, in consultation with the USEF Talent Search Technical Delegate Anthony D’Ambrosio, designed a gymnastics course with a trot-in combination, rollback turns, and a bounce line requiring adjustability to further assess the riders’ abilities. The judges decided to score the gymnastics phase similar to a dressage test with 10 sections: nine jumping exercise sections and an overall impression section.

“We thought this was a good way to do it because if someone made a mistake at one part of the course it didn’t give them an automatic 40 for a refusal, for instance, but we took into account how well they performed the rest of the test,” explained Winkel. “At the end the scores were totaled, and their scores were much like dressage scores, but were typically lower than what we are used to seeing in our hunter or equitation scores. So, scores in the 70s were quite good, and we did have scores in the 80s as well, which was outstanding. I think the biggest thing to understand about doing it like that is that the scores are lower than you would normally score an equitation round.”

Wireman took top honors in Phase II with a score of 85.0. Cliff led at the end of day one, while Wireman was in third place.

The final day of competition began early with Phase III, where riders rode over a 1.15 meter jumping-style course requiring smooth, forward riding. Wireman topped Phase III with a score of 90.0 and moved into second place on the leaderboard.

Four riders moved on to Phase IV, the ride-off: Cliff, Wireman, Kaitlyn Lovingfoss, and Amber Ayyad. These top four riders competed over a shortened course first with their own horses, then with each of their competitors’ horses to show the adaptability of their skills. At the end of the rounds, Wireman was crowned the champion with an overall score of 354.0.

“For me, it is pretty unreal,” Wireman said of winning the title. “Last year I was fourth, so I made it to the final four, which was really exciting. Then, this year it was kind of surprising that I made it [into the final four] because I started in 18th after the first phase and I moved my way up to third after the gymnastics phase, and then I moved up to second after the jumping phase. It was really unreal for me. It still hasn’t fully set in.”

Wireman felt comfortable in Phase IV thanks to her past experiences. “I had ridden Parker Cliff’s horse last year in the final four, then I have done so much catch-riding for Nick [Haness] and several other trainers, so I am pretty used to getting on a strange horse and jumping a few jumps and going in. Also, I had watched a lot of those horses go for the past couple weeks, so I was pretty confident going into the final four.”

The USEF Network has on-demand video of all four phases of the Finals. 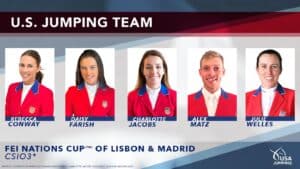 By Us Equestrian Communications Department US Equestrian is pleased to announce the athletes selected to represent the U.S. Jumping Team for FEI Jumping Nations Cup Lisbon CSIO3* in Lisbon, Portugal 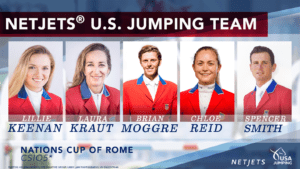 By US Equestrian Communications Department US Equestrian is pleased to announce the athletes selected to represent the NetJets U.S. Jumping Team for the Nations Cup of Rome CSIO5* at the 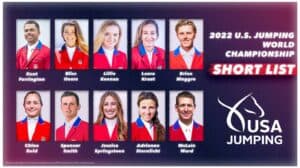 By US Equestrian Communications Department The NetJets U.S. Jumping Team is pleased to announce the ten athletes selected to the Short List for the 2022 FEI Jumping World Championships to 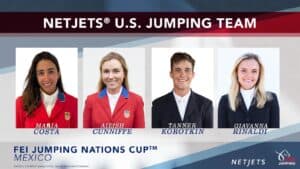 By US Equestrian Communications Department US Equestrian is pleased to announce the athletes selected to represent the NetJets U.S. Jumping Team at the Longines FEI Jumping Nations Cup Mexico CSIO5* 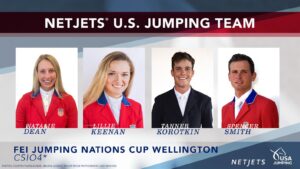 By US Equestrian Communications Department US Equestrian is pleased to announce the athletes selected to represent the NetJets U.S. Jumping Team at the FEI Jumping Nations Cup CSIO4* Wellington hosted 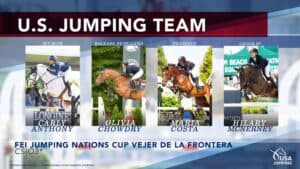