Second place on 13 faults went to Ireland, while Australia rounded out the top three on 22 faults.

“It’s quite a surreal feeling,” said Moggre of his double-clear debut aboard MTM Vivre le Reve, a 2009 Westphalian gelding owned by Major Wager LLC. “To be on the team here and to jump really meant a lot.” 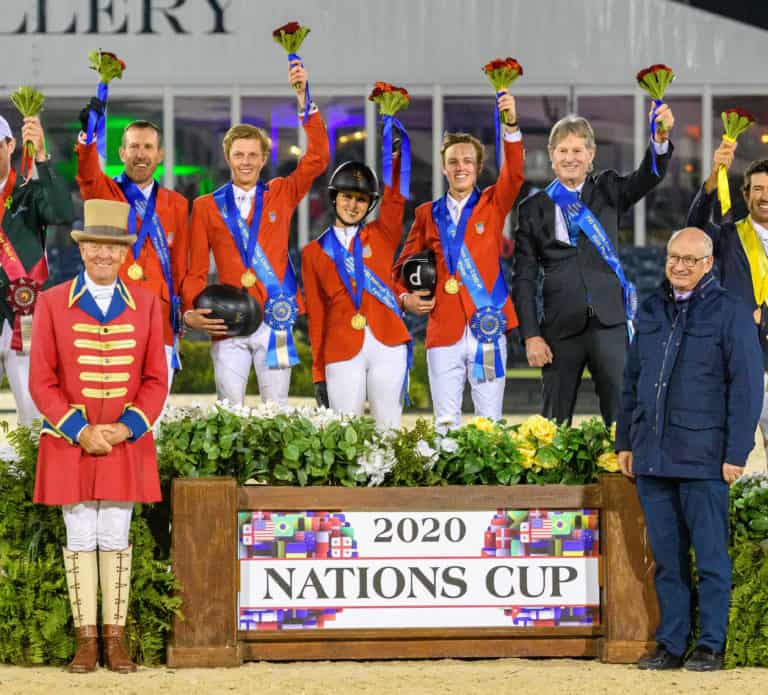 “Everybody wants to jump clear their first time on the team, so for my horse to make that happen for me, I couldn’t be more thankful,” continued Moggre of the horse whose name fittingly translates to “living the dream.”

Fueled by clear first rounds from Moggre and MTM Vivre le Reve, Porter aboard C Hunter, and Sternlicht and her 2009 Belgian Warmblood mare, Just A Gamble, and only one time fault from Kocher and Squirt Gun, the U.S. team shot to the top of the leaderboard with no faults at all heading into round two.

Kocher, 36, returned to deliver a clear round with Squirt Gun, a 2011 Oldenburg gelding owned by Eye Candy Jumpers. With another clear from Moggre and only four faults from Porter, 22, and Sleepy P Ranch LLC’s 2007 Zangersheide gelding, C Hunter, the USA had secured the victory by the third rotation of riders, eliminating the need for Sternlicht, 26, to jump a second time.

“Everybody was basically having their debut tonight until they came to the anchor rider, our veteran anchor rider, Adrienne,” said Ridland, referencing Sternlicht’s third consecutive year appearing on the U.S. team for the FEI Jumping Nations Cup Wellington. “It was really exciting to be able to do that. It really fits into what we’ve always tried to do; you can have a team of three veterans and two newer riders. It’s all in the same spirit of giving experience when it really counts.

“There’s nothing like pressure at home,” continued Ridland. “It’s a home Saturday night here with everything on the line; nobody in the stands cares that this is their debut. They’re rooting for the Americans. The American flag was everywhere. Everybody here knew what the pressure was all about. Same thing when you had pressure in Tryon [at the 2018 World Equestrian Games], it’s a different kind of pressure at home. For these riders to experience that and to have the flag on the saddle pad for the first time, this is invaluable.”