Rio de Janeiro – Aug. 17, 2016 – The Show Jumping Team Final at the 2016 Olympic Games had no shortage of peaks and valleys, with excitement from start to finish. After Tuesday’s Team Qualifier, four nations advanced with scores of zero, but a technical track with a tight time allowed and three teams with only three riders shook things up quickly. 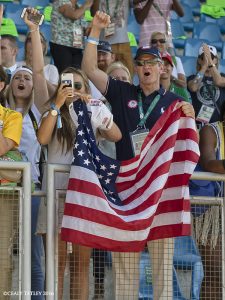 The United States, the Netherlands, Germany and Brazil all qualified for the Team Final with no faults to their name. However, the Netherlands and Brazil each lost a rider due to disqualification from the “blood rule,” and the United States lost their anchor rider, Beezie Madden, when Abigail Wexner’s Cortes ‘C’ sustained a tendon injury after Tuesday’s competition. Thus, all of the rounds for the three teams counted, and the loss of a drop score left no room for error. The French and the Canadians were hot on the lead teams’ heels with 1 time fault and 4 faults, respectively.

Wednesday’s track was very challenging for the athletes, with a tight triple combination, a double combination of plank walls and tight time allowed that caught over half of the starting entries.

France’s Philippe Rozier put the pressure on early with a faultless round over the fences and incurred just 1 time fault aboard Rahotep De Toscane. The United States’ Kent Farrington was up next with Amalaya Investments’ Voyeur and duplicated Rozier’s round with just 1 time fault.

“I saw a lot of horses struggling to jump the triple combination clear, so I really set him up for that,” explained Farrington. “Every rail is going to matter today, so I wanted to secure that before I took a bigger risk on the time. I thought he jumped amazing, so I was really pleased with the horse.”

Lucy Davis went in the ring focused on delivering a solid performance for the United States with Old Oak Farm’s Barron. At just 23 years old, Davis is making her Olympic debut and with no drop score the pressure was on. The pair looked good until the end when they had ‘B’ of the triple combination down, adding 4 faults to the U.S. total.

“I was pleased with the round, but not thrilled because I would have liked to have gone clear,” admitted Davis. “He jumped amazing all days, including today. I wasn’t really expecting that rail because he was jumping so confident and smooth. I came around the turn and saw my distance, and I don’t know if he saw something or what. I am just happy that we could get through it and stay within the time. That was really key because I think it’s going to be really close, so hopefully I can help the team in that way.”

McLain Ward was in the ring next with HH Azur for the United States, and the pressure of the Team Final continued. Ward needed a clear round over the fences or the team would be knocked out of the running for a podium spot. The Olympic veteran was prepared to deliver, and the duo crossed the finish line with one of only five clear rounds of the day.

“I don’t think you stay good at something for very long if you’re not a little nervous and you don’t feel the pressure, that’s what drives you,” said Ward. “I think I am sitting on a bit of a better horse than everybody else, so that makes my life a little bit easier.”

Ward continued, “She has a big stride, so I did the options that were leave-outs, so that helped with the time allowed a little bit. I really thought she jumped as good as ever, if not better than the rest of the week. It was a round I’m proud of and I’m proud of this team.”

There was still room for an upset, but when the Netherland’s, Brazil and Germany each ran into trouble with their third rider in the rotation it sealed the United States’ silver medal finish.

“I would say the four years that led up to today — it’s amazing how it all boils down to today, it worked out pretty well,” smiled Chef d’Équipe Robert Ridland. “All of our scores had to count today, we knew that. They were all unbelievable. Unbelievably focused, they knew what their job was and they got it done. It was tremendous.”

Now the top 35 athletes will look ahead to the two-round Individual Final on Friday, where all scores will reset to zero. Farrington, Davis and Ward have all advanced for the United States. For riders like Davis the start on zero helps, but for riders like Farrington who was tied for second with just 1 fault over the three days, it can be frustrating.

“It’s a whole new day, everybody starts at zero,” Farrington stated. “I am really thrilled with how Voyeur is going, but that’s not going to count for anything other than some confidence when we all start over. Tomorrow, I’ll just pet him and tell him that he’s good and let him rest.”

The Individual Final will get underway at 9 a.m. on Friday. Live results can be found here or follow the USET Foundation on Twitter at www.Twitter.com/USETFoundation for live updates.