Aachen, Germany — July 14,2016 –After turning in a total of five clear rounds, Team U.S.A. finished second and tied with France in the Nations Cup at the famed CHIO Aachen. 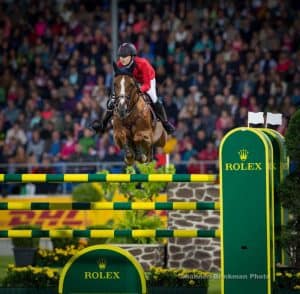 Entering round two on zero faults and tied for first place with Germany, Team USA finished the round strongly on just four faults. Both Kraut and Davis turned in double clear rides, after Ward collected an unfortunate 12 faults, and Madden’s Cortes ‘C’ had a foot in the water.

With three of the members of the 2016 U.S. Olympic Show Jumping Team riding in Thursday’s Nations Cup, a successful Olympic Games seems to be on the horizon for Team U.S.A.

For more information about Team U.S.A. and the USET Foundation, please visit http://uset.org/.