Paris, France – April 14, 2018 – Following an exciting FEI World Cup™ Dressage Final in Omaha, Nebraska, in 2017, international dressage fans had their eyes glued to the competition in Paris to see if the world No. 1 ranked rider from Germany could defend her title or if Laura Graves could dethrone the ‘Queen.’ Though rising star for the United States, Laura Graves, topped the field on Friday in the Grand Prix, when it counted the most, the reigning champion Isabell Werth used her experience to jump into the lead to claim her fourth FEI World Cup™ Dressage Final title at the conclusion of Saturday’s Grand Prix Freestyle.

During her third World Cup Finals Grand Prix Freestyle, Graves laid down an expressive and clean test in the second half of the class with her 16-year-old KWPN gelding Verdades (Florett As–Lilwilarda, Goya). In December, Graves worked with her team, including her trainer Olympian Debbie McDonald, to redesign the choreography of her “Rockie” freestyle in order to receive a higher degree of difficulty score, which featured two piaffe pirouettes, an extended canter into a pirouette before executing a line of two tempi changes up the centerline towards C. As they approached C, they turned into a double pirouette before repeating this pattern with a line of one tempi changes replacing the two tempis.

After receiving a ruckus applause after her salute, the score of 89.082 percent was announced to the crowd at the AccorHotels Arena in Paris — the highest score of Graves’ career. But was it enough to claim her first World Cup Finals title? She only had to wait a few rides to find out.

Werth, who won her first World Cup Finals title 26 years ago, was second to last to head down centerline and had to top Graves’ score in order to clinch the win on Weihegold OLD, a 13-year-old Oldenburg mare (Don Schufro–Weihevoll, Sandro Hit) owned by Christine Arns-Krogman. They laid down a harmonious and clean freestyle, which led them to victory in Saturday’s highlight event with a 90.657 percent. The score difference between the rivaled pair was much closer in Paris, with only one and a half points separating Graves and Werth, compared to their results in Omaha when Werth earned a 90.704 percent and Graves had a 85.307 percent. 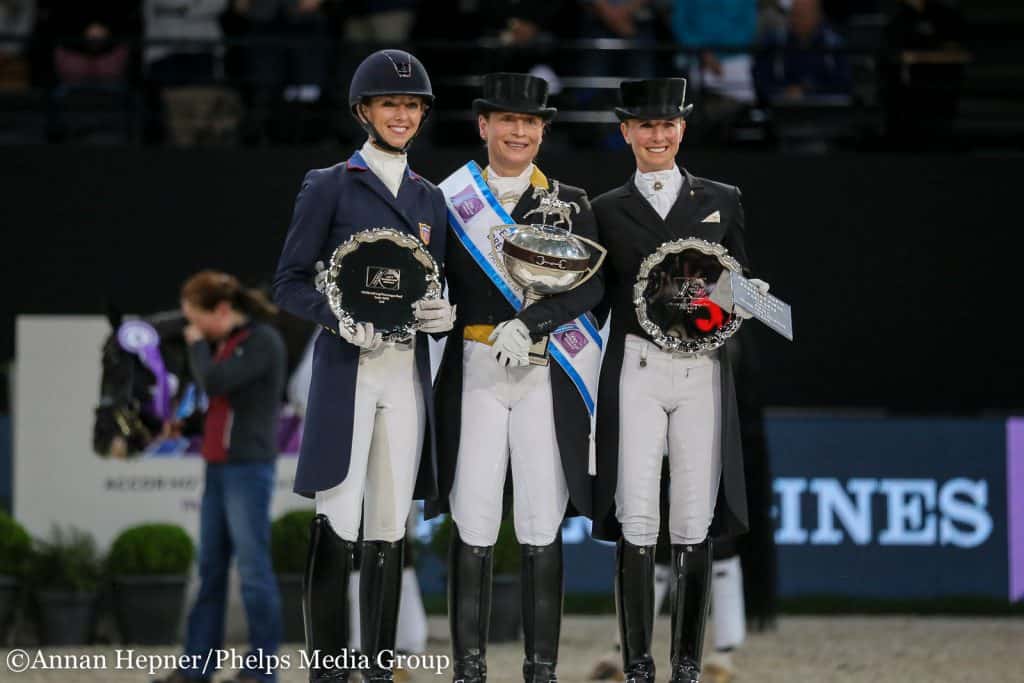 Last to go in Saturday’s Grand Prix Freestyle was Germany’s Jessica Von Bredow-Werndl and Beatrice Bürchler-Keller’s Unee BB, a 17-year-old KWPN stallion (Gribaldi–Ilarichta, Dageraad). They earned a score of 83.725 percent to slide into third place on the leaderboard behind Graves.

Fellow American, Shelly Francis and Patricia Stempel’s Danilo were first in the ring for Saturday’s Grand Prix Freestyle and earned a 74.189 percent.

On her ride:
“I’m super excited. He actually felt a lot more relaxed in there than he did yesterday, which is not normally the case when you add music, but he’s not really a sound sensitive horse. We schooled him in there just really lightly this morning in a snaffle and he was terrific, so I had a pretty good feeling going into today that we could feed off of that relaxation. I’m pleased with him.”

On her freestyle highlights:
“The half-passes I was really pleased with, keeping clean in all the changes, that’s a big point mistake if you can’t get your changes clean. He really felt super rideable for the whole thing. When we changed the music and I haven’t ridden to it since, we’ve added a second piaffe pirouette on the centerline so maybe the timing could’ve been a bit better, but I’m proud of him for doing the piaffe pirouette both ways. That was a highlight for me because it’s easy to chicken out. I think he was really super in his head today. I don’t think we’re too far off from the world record. I’m feeling all the mistakes in myself that maybe if I practiced we could iron out a bit. I feel excited for the rest of the year. Today we are second, but still a personal best for us.”

On her rapid success to the top in only four years:
“To be honest, I spend a lot of time studying even before I was making the Grand Prix, I would study riders like Isabell and try to learn everything. I keep myself in that position every day. I have to pay respect to my horse, because without these top horses who want to do the job for us, learn and all us to learn with them, and really a quality horse that can compete at this level, none of this would be possible.”

On her second place finish:
“I knew anything was possible. I knew it would take a score like that to possibly have a win. It was still a huge personal best for me, so I was a bit surprised, especially because I always come out of the arena thinking of all the things I could’ve done better. I think I have a bit of homework we’ll be better prepared. I think there are many more points to earn out of that freestyle.”

On Saturday’s Grand Prix Freestyle:
“This is my first time judging World Cup Finals so I was feeling the excitement and a little bit of the stress of having to do it. When Laura came in, she had so much energy and so much excitement that I just knew she was going to get a great score. She rode such a clean test, it was really wonderful. Isabell, of course, had a bad day yesterday, but she came in and the mare was so with her and it looked so easy and harmonious. The piaffes, passages and transitions are 9s or 10s almost all of the time. I was at F in the corner and when Isabell came around for her last centerline, the look on her face already said, ‘I’ve got it, I’ve won, this is no problem.’ It was very close, and I think the difference was the piaffe, but they both were so exciting to judge.”

“We had better piaffes and better passage. A little bobble in the twos, a little bobble at the end of my second zig zag but it felt really good. He was really trying to go. He likes his music, it was awesome. The score was not the greatest but that happens when you go first and do the Grand Prix the day before. I feel like we redeemed ourselves a little from yesterday. It’s always hard to go first. I’ve gone first many times, but it’s always a little disadvantage. I’m over here in Europe to hopefully do Copenhagen and Rotterdam and Aachen, and my horses are in the top eight at the moment so trying out for WEG. We’ll see, if we have a better Grand Prix than we had here, that will matter. I’m giving it a go.”

Lexington, Ky. – US Equestrian is pleased to announce the updated U.S. Dressage Elite and Pre-Elite Lists for 2020. The Elite Program was established to provide support and resources to athlete/horse