Gladstone, N.J. – May 21, 2017 –  On the final day of The Dutta Corp. U.S. Dressage Festival of Champions, Olympian Kasey Perry-Glass and Goerklintgaards Dublet clinched the overall Grand Prix championship title with a total score of 71.575 after earning a 73.325 percent in the freestyle.

“Today I was really working on keeping my eyes up,” she explained “I tried to make it a pretty clean test, and that didn’t happen either. There’s just times when he gets a little behind my leg and a little tired. He might look energetic, but there’s some times when he gets a little dull and I felt that this week with him. It’s just learning the ups and downs of him and really figuring out the horse I have that day.

“I’m proud of us fighting through it and keeping our heads up and going,” Perry-Glass concluded. “Having the support of these two [Adrienne Lyle and Olivia LaGoy-Weltz] and the other teammates was great. It’s fun to compete here and I’m pretty lucky to.”

Earning the red reserve championship cooler was Adrienne Lyle aboard the 10-year-old Hanoverian stallion Salvino. The pair won Sunday’s Grand Prix Freestyle with an impressive score of 76.325 percent, but it was not enough to overtake Perry-Glass’ lead. It was the first time they had competed a Grand Prix Freestyle and the score was a personal best.

“I couldn’t be happier with what he gave me — there’s a ton of power,” Lyle said. “He’s such a cool, level headed horse, and I think very shortly I’m going to feel comfortable just tapping into even more potential in there and pushing him for more of what he has to offer.

“I had a blast in my test. It was Wizard’s old freestyle and we edited timewise to fit his big stride,” she continued. “I’ve ridden it for years on Wizard and it’s just fun music. It draws the audience in and I was thrilled with how Salvino handled it.”

Coming in third place in both the Grand Prix Freestyle and the overall championship was Olivia LaGoy-Weltz and Lonoir, a 13-year-old Danish Warmblood gelding.

“I was really happy with how clean it was,” LaGoy-Weltz said. “It was smooth, but I think there’s a whole other echelon of brilliance in there that comes out in the awards that’s in there to tap into — I just need to have the guts to do it! I have to hunker down and gas him up a bit more, because it’s there. We’ll be looking at that this summer and coming out with something totally different.” 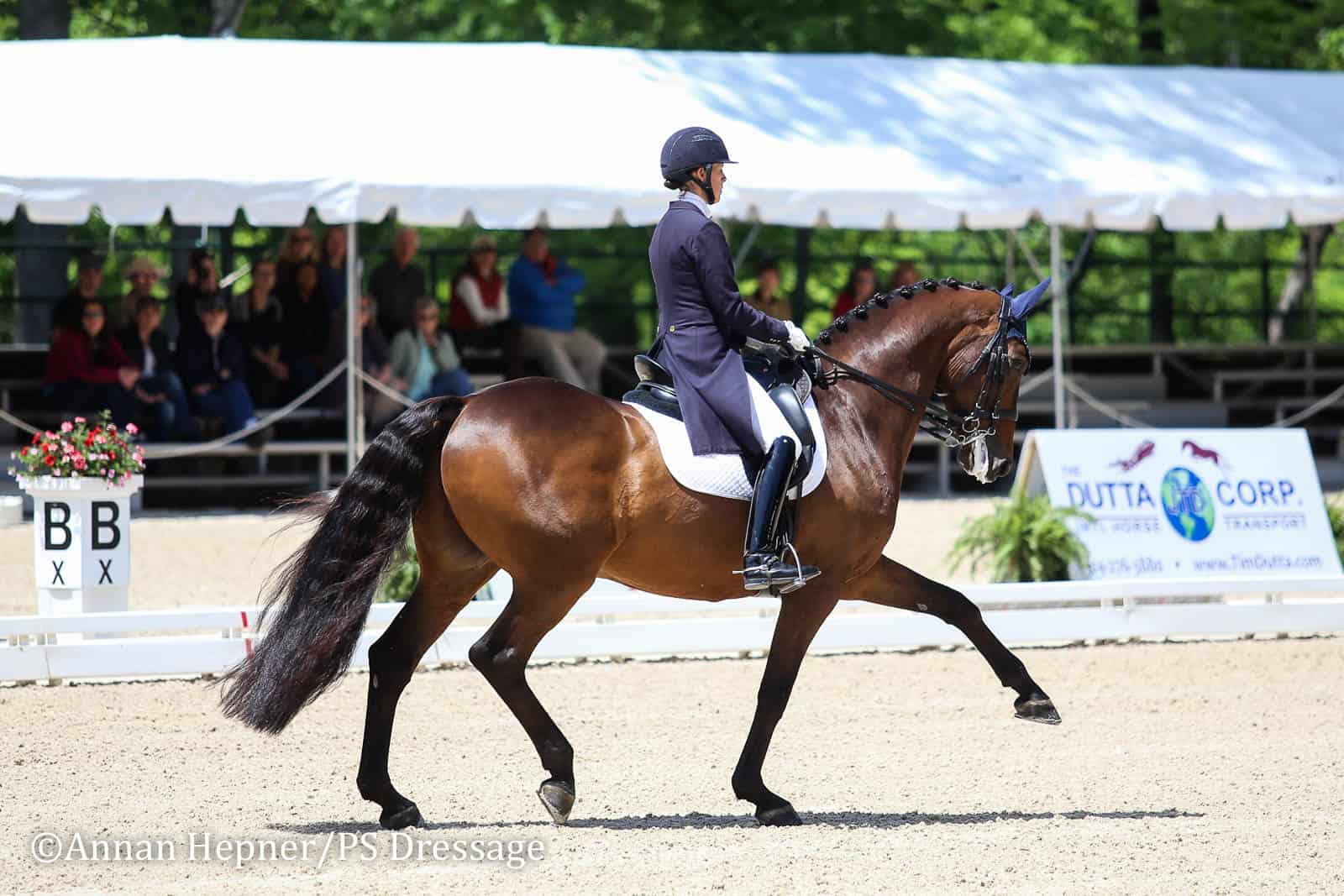 All of the riders who made the top three placings in the overall Grand Prix championship, Perry-Glass, Lyle and LaGoy-Weltz, train with Debbie McDonald, and love being able to compete with each other.

“It’s really important to have friends like that, especially when you’re competing against them,” Perry-Glass said.

“We absolutely root for each other — 100 percent!” Lyle explained. “It’s all keeping it in the family. If any one of us wins, it’s awesome.” 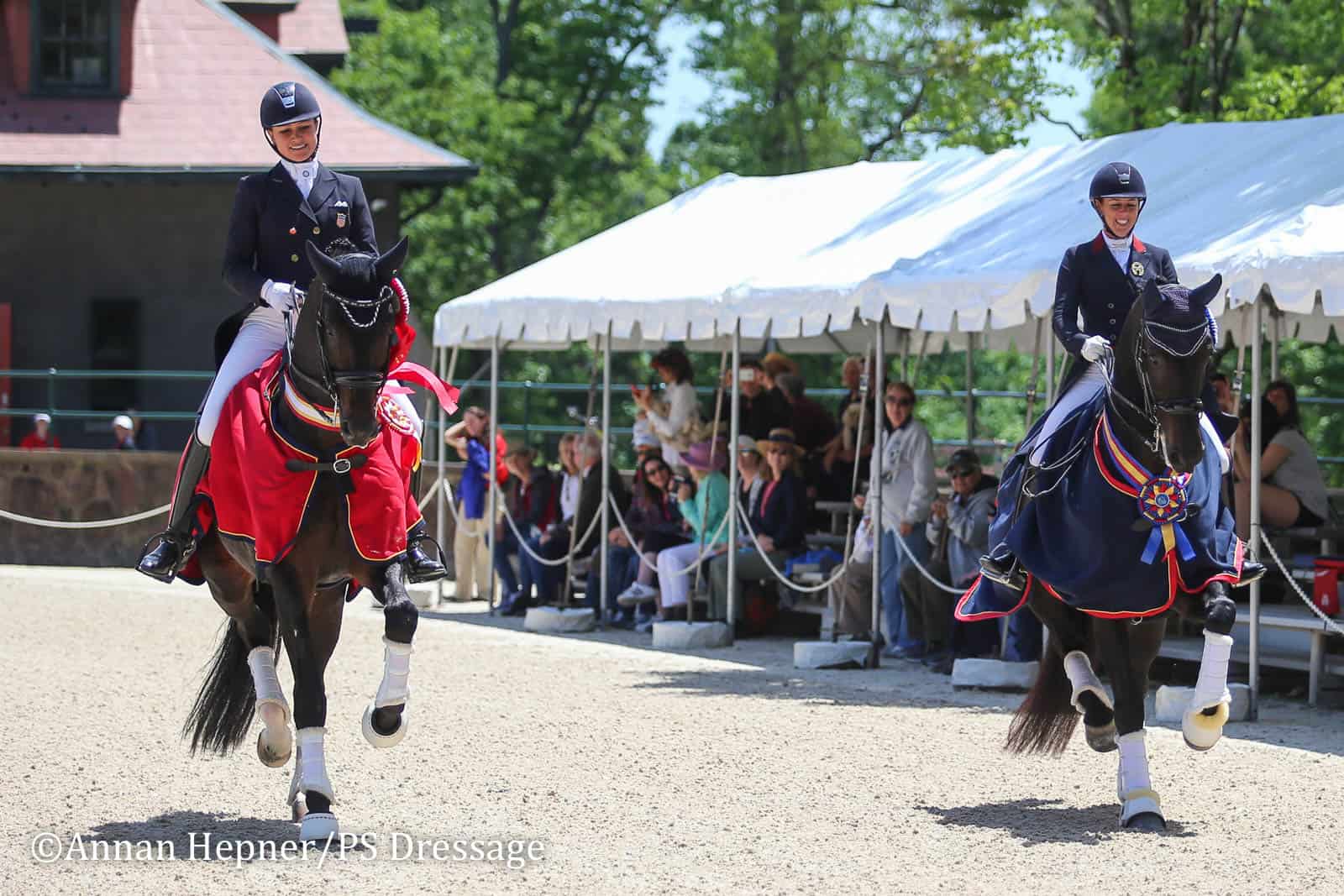 The president of the ground jury, Gary Rockwell, was pleased with the high level of competition he saw while judging the national championship.

“It’s always a thrill to be here [at Gladstone], and this was exciting competition,” Rockwell said. “I think everyone made their best effort and it paid off, we saw some really good rides today.”

“I told the riders not to make any mistakes because it makes our jobs easier, but they never listen,” Rockwell laughed.

PrevPreviousAdrienne Lyle and Horizon Dance to Victory in Intermediate I Championship at The Dutta Corp. U.S. Dressage Festival of Champions
NextKaitlin Blythe and Don Principe Wrap Up ‘Brentina Cup’ Championship With Freestyle VictoryNext