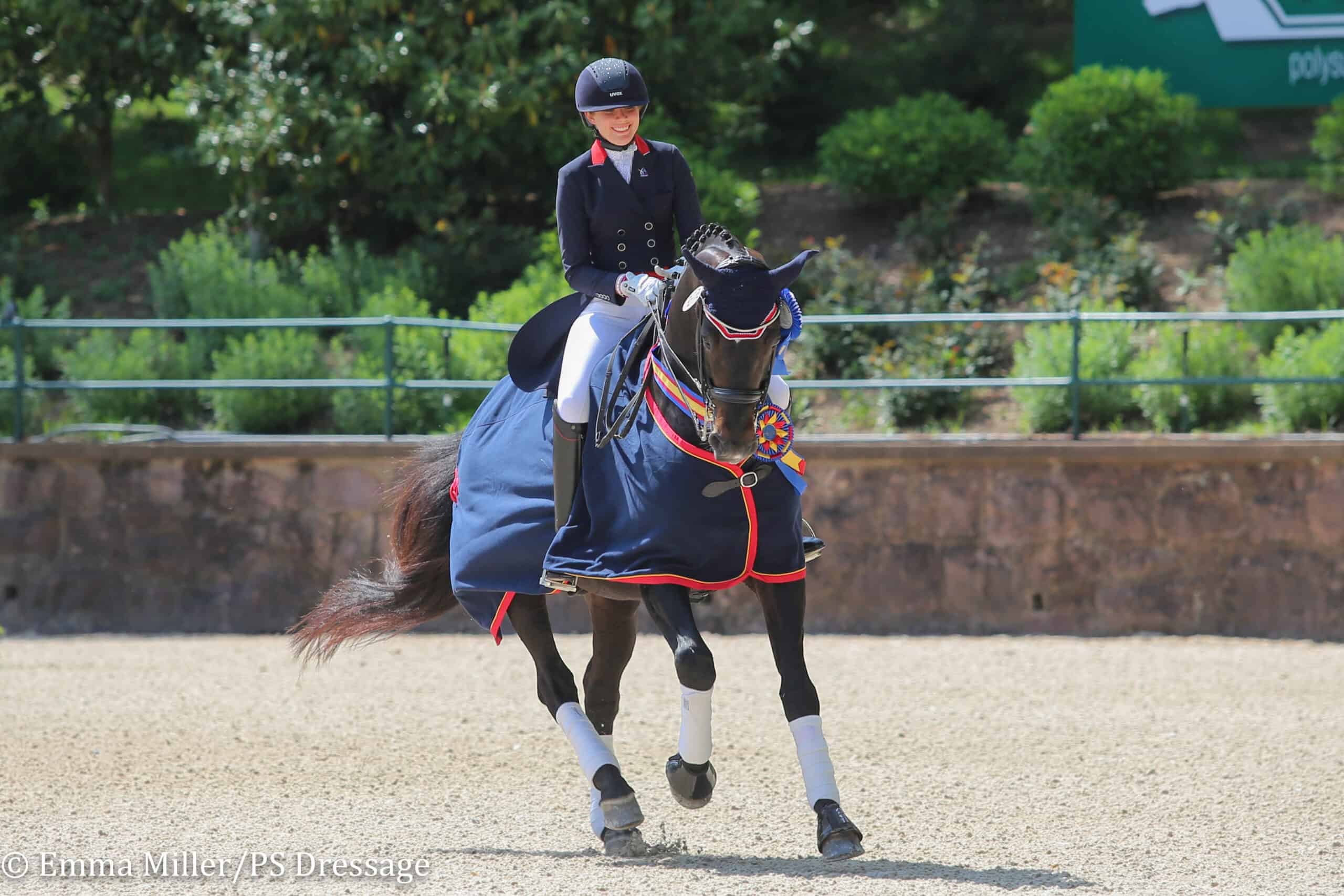 Gladstone, N.J. – May 21, 2017 – In her last year of eligibility in the Under 25 division, Kaitlin Blythe claimed a memorable victory by winning the ‘Brentina Cup’ Championship aboard Don Principe, an 18-year-old Hanoverian stallion owned by Maryanna Haymon. The combination earned a Grand Prix 16-25 freestyle score of 69.3 percent, edging them into first place overall with a total of 66.769 on the final day of The Dutta Corp. U.S. Dressage Festival of Champions.

“I’m thrilled with my horse,” Blythe said. “He loves the freestyle — it’s his favorite thing and he lights up in the arena.”

Blythe rode the freestyle that had been passed down from riders who had been paired with Don Principe previously.

“It was originally made for Courtney King-Dye when she rode him. Jennifer Baumert rode to it, as well as Michael Bragdell — now my turn!” 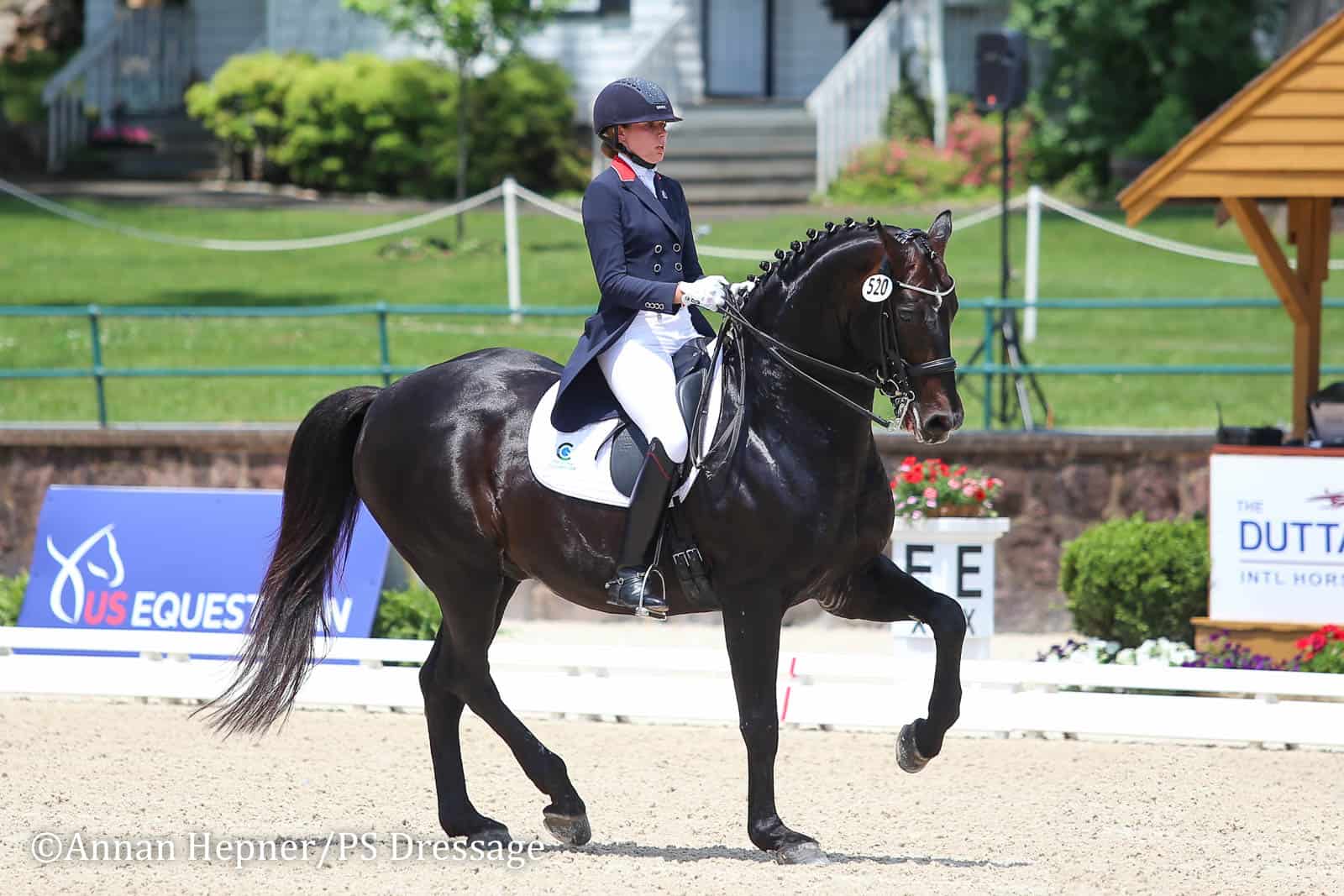 “I cannot believe that this is real life right now,” she continued. “It’s surreal. I am so thankful to everyone who helped me get here — The owners of this horse because there is no way I could have done this without him. Anne Gribbons, who coached us to build a partnership in such a short amount of time. Debbie McDonald who helped us this week.

“I am so grateful, especially to my horse,” Blythe said. “He tries his heart out and truly has a heart of gold — I have so much respect for him and what he has done for the sport. It’s been very special to have a partnership with him.

“I started riding him in December and he just is such a willing horse, and he has his moments where he’s like ‘No, no, no, like this little girl’. He’s such a great teacher and he has such an incredible character that he passes along to his offspring as well.”

Blythe had a successful winter competing the stallion in multiple CDIs, as well as the U25 Nations Cup in Wellington. In April, Blythe, as well as Adrienne Lyle, were suspended by the FEI after their mounts were found with trace amounts of ractopamine, a forbidden substance. After further investigation proved that Cargill’s Progressive Nutrition® Soothing Pink™ was the cause of the contamination, their provisional suspensions were lifted in order for them to compete in the national championships.

Claiming the reserve champion title in the ‘Brentina Cup’ Championship was Natalie Pai and Unlimited, a 16-year-old KWPN gelding, with a freestyle score of 65.95 percent and a total score of 66.444.

“Unlimited was awesome today,” Pai said. “He likes the freestyle, and he gets much more active and energetic. I was really happy with him and a completely clean test.

“I am so thankful to be here,” Pai continued. “It’s incredible. This whole weekend I cannot believe that I was able to really step it up and make every single change clean. He was so good this weekend and today he gave his heart.”

Molly Paris and Countess, a 15-year-old Danish Warmblood mare, finished in third place overall with a total of 65.992 after earning a score of 66.975 percent in the final freestyle.

“I was really happy with our trot tour,” Paris said. “She is an amazing mare and is teaching me so much. I’m really excited to see where we are going.”

Paris and Countess danced to a freestyle that included music by the alternative rock artist Saint Motel.

“Our ride was a little testing,” she explained. “Countess is an awesome mare, but there were a lot of miscommunications.

“Chris [Hickey] is going to make me do an open Grand Prix so I’m really nervous, but she is totally ready for it,” Paris laughed. “Our warm-ups have been great all week, we just had missteps in the arena. I’m really excited to take that step with her.”