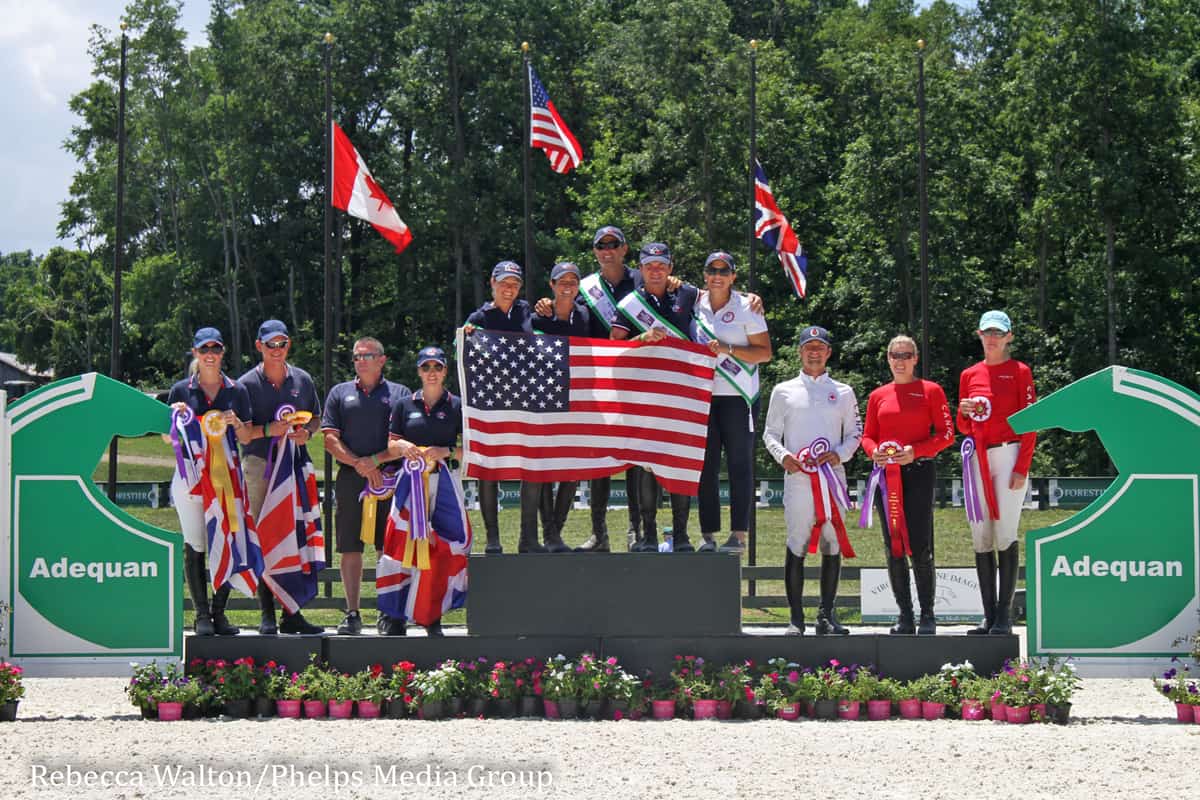 The Plains, Va. – July 9, 2017 – For the second year in a row, the United States took home top honors during the only FEI Nations Cup™ Eventing competition in North America at the Great Meadow International (GMI), presented by Adequan®. The competition stayed close until the very end, where Jennie Brannigan and her 2015 winning mount Cambalda edged out the individual win, followed by teammates Lynn Symansky on Donner in second and Phillip Dutton with I’m Sew Ready placing third.

Following Friday and Saturday’s dressage and show jumping phases Canada’s Jessica Phoenix and Pavarotti had the individual lead, with the team in third just six-tenths of a penalty behind Great Britain. Dutton and I’m Sew Ready were ranked second, followed by Jan Byyny and Inmidair in third. Unfortunate time penalties for Phoenix knocked her out of the top spot early in the day. Meanwhile, a fall, as well as an elimination on the British team, meant they would finish third, while Canada and the United States duked it out for the top spot in the Nations Cup.

Boyd Martin and Steady Eddie were the first pair to tackle the cross-country course for the United States, producing the only double-clear performance for Team USA. The duo finished on their dressage score of 58.3 penalties, but strong efforts by the rest of the team meant they would be the drop score.

“I always envisioned Steady Eddie making a team. Finally, I got a call up and it was followed by his worst-ever dressage score,” admitted Martin. “I’ve been talking him up, there’s been a lot of hype and then he was an absolute lemon on Friday. He came through — he was the only horse to finish on his dressage score, so I hope to take him to Burghley in a couple of weeks. We might do a little practice with the dressage before then.”

“I grew up working for Phillip and under Boyd and I always wanted to be on a team with them, so this was very special for me,” expressed Brannigan. “It’s an honor to get to ride for your country. [Cambalta] has been an incredible horse in a lot of ways and wonderful to me. I really appreciate him stepping up to the plate.”

The U.S. team finished with a total of 151.5 penalties, and despite the Canadian team having two clear efforts over the cross-country course it wasn’t enough to catch the American athletes on their home turf. Canada’s total score of 168.6 penalties would rank second as the United States stood atop the podium during the second Great Meadows International CICO3*.

“You can only be impressed with David O’Connor’s vision and what Rob [Banner] and Darrin [Mollett] have accomplished,” concluded Dutton. “[The event] has grown every year. The success of an event revolves around a cross-country course. The course is getting stronger and stronger each year. It’s a great show. We are very fortunate to have a couple venues in this country that are willing to put on a CCI4*, and whichever one gets it will do a great job and it will be great for the sport of eventing.”