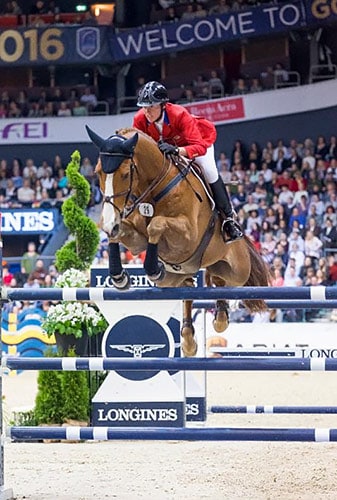 Gothenburg, Sweden – The 2016 Longines FEI World Cup™ Jumping Final concluded this afternoon with 26 starters entering the Scandinavium Arena for day three’s round one. Twenty combinations moved forward to round two, taking on challenging tracks set by course designer Santiago Varela Ullastres. Impressing in their FEI World Cup™ Final debut, Callan Solem and VDL Wizard finished the day as the top-placed American combination in seventh place. Also representing the U.S. in the final round were Peter Lutz and Robin de Ponthual who placed 19th and Rich Fellers and Flexible who finished tied for 22nd.

Entering round one tied for sixth on five faults, Solem (Glenmoore, Pa.) and Horseshoe Trail Farm, LLC’s VDL Wizard had an unlucky rail at fence one, but otherwise put on a masterclass performance. Returning 12th in the order on nine faults in round two, the pair proved their mettle, putting in a foot perfect clear round.

“He [VDL Wizard] should have been double-clear, but I was a bit slow getting to the first fence. It was totally my fault. But even with the first fence down, we kept fighting, which I think is so important. And then he came back in round two and was perfect. He is the best,” said Solem.

Lutz (Goldens Bridge, N.Y.) and Katherine Gallagher and M. Michael Meller’s Robin de Ponthual began round one tied for 10th on eight faults. They had an unfortunate start to round one, downing the wall at fence three, then added eight more faults to their score for a total of 12, qualifying for round two on 20 total faults. In round two, Robin de Ponthual showcased great scope, but had three rails down over the massive track to finish in 19th. 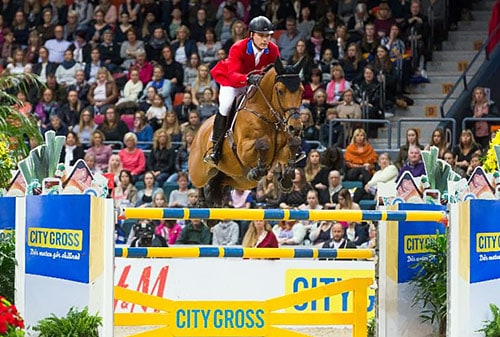 “I was a bit unlucky in the first round. Robin has been great all week, but he was totally surprised by the wall. So we had a bit of a rough start, but I think he recovered quite well and jumped the rest of the course fine, just a little distracted by what had happened. He finished really well also, just had some of his inexperience show in round two. All the scopey tests of the course, he sailed over them,” said Lutz.

The day capped off a successful week for the pair, representing the U.S. and competing in the FEI World Cup Final for the first time. “I learned so much here. I came here wondering how big the jumps were going to be, and they were big, but now I know that my horse can do it and that we can do it,” said Lutz.

Competing in their seventh Final, Rich Fellers (Sherwood, Ore.) and Harry and Mollie Chapman’s Flexible were in 25th place on 18 faults entering round one. The 20-year-old stallion demonstrated once again that age is only a number, jumping a smart round and adding one rail to their overall total. The pair did not qualify for round two, placing 22nd overall.

With the top five on the leaderboard beginning the day within four-faults of each other, it proved to be an exciting and tense battle for the Champion title. After clear round one jumping efforts from Steve Guerdat (SUI) with Corbinian, Harrie Smolders (NED) with Emerald N.O.P., and Daniel Deusser (GER) with Cornet d’Amour, the three sat atop the leaderboard within three faults of each other with Guerdat on zero, and Smolders and Deusser on three. In a nail-biting end to the Final, both Smolders and Deusser jumped clear in round two to put the pressure on Guerdat. The 2015 Champion, Guerdat, emerged the victor, defending his title after a faultless final round. Smolders took second place overall based on a faster round two time, while Deusser placed third.