Wellington, Fla. – March 28, 2018 – On the final week of competition at the Adequan Global Dressage Festival, nine youth riders from three different countries made their way down centerline to compete for the team championship in the CDIO-U25 Nations Cup.

In the Under-25 division, teams are made up of two or three riders, with the top two scores counting for their totals. The team with the highest combination of the two scores walks away with the gold medal. Countries participating in the event were The United States, Spain, and Canada who entered two teams. The Spanish team walked away with the team gold medal with a total score of 140.588, followed by the United States team with a total score of 132.412. Team Canada 1 rounded out the top 3 with a total of 131.647. 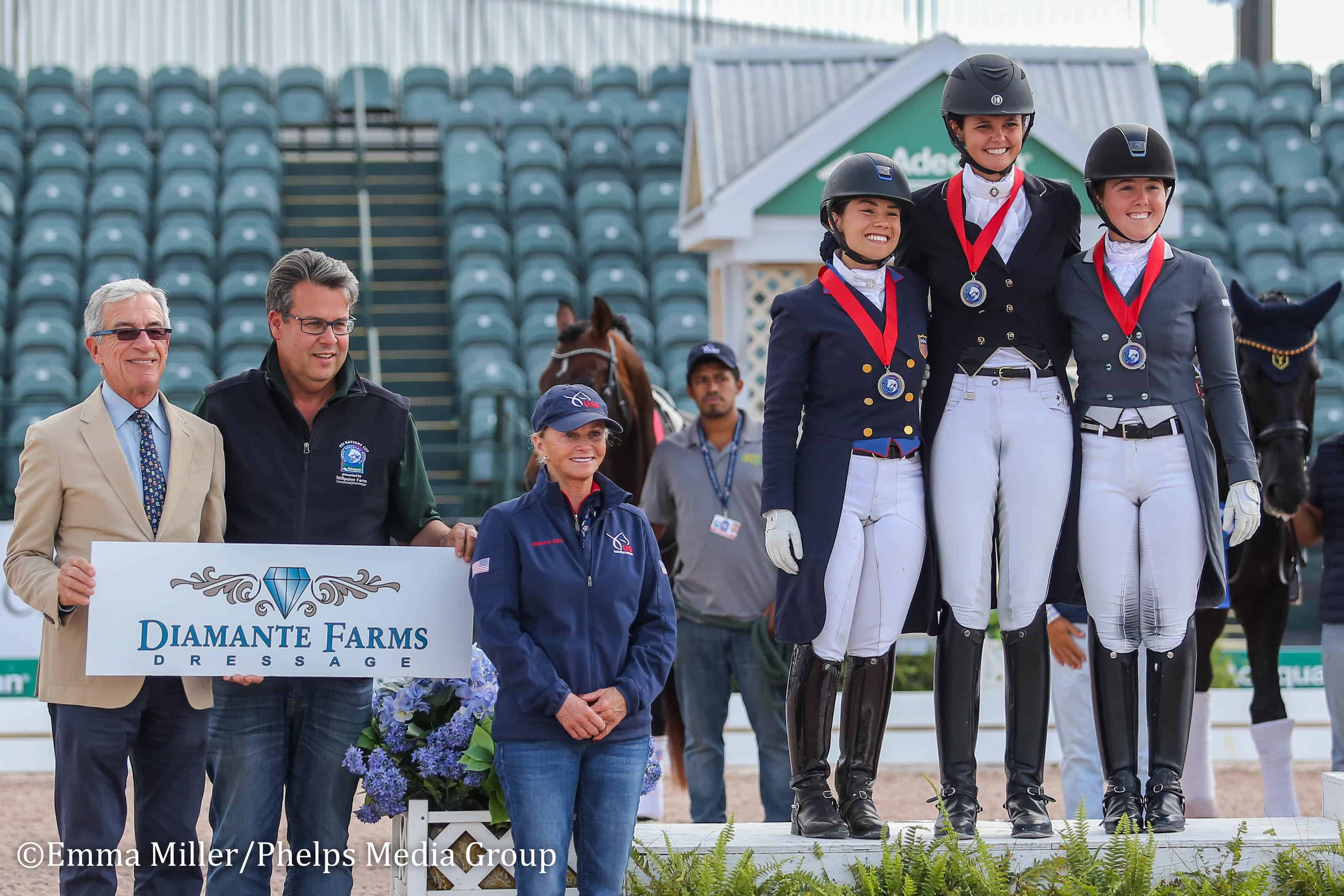 Three riders competed for Team USA this afternoon, allowing them to have a drop score, for a total score of 132.412. First in the ring for the U.S. was Kerrigan Gluch, aboard Bolero CXLVII, a 14-year-old PRE Stallion (Utrerano VII – Felina XVII, Urano II) owned by Hampton Green Farm. Gluch and the stallion earned a score of 65.706 percent. Next in the ring for Team USA was Natalie Pai aboard Unlimited, her mother’s 17-year-old KWPN gelding (Jazz – Clairudtih, Winckenburgh) earning a score of 65.442 percent. Their anchor rider, Molly Paris earned a final score of 66.706 percent aboard her 16-year-old Danish Warmblood mare (Don – Compeed, Solos), Countess.

Molly Paris
On Competing on the US Team:
“These girls on this team are like family, we’ve known each other since 2014 when we were still juniors — we’ve been together a lot so it’s a great opportunity to be on the same team.”

On Her Ride:
“She [Countess] tries so very hard for me, she’s a super talented mare and I really can’t ask for more from her. We ran out of steam a little bit today and hopefully, we can get a little bit of a better score for her tomorrow, but overall I’m very happy. She’s a good girl and she owes me nothing, but here she is.”

Kerrigan Gluch
On Her Ride:
“I was really happy with my test today. My horse is still a new show mount for me – I haven’t competed him much at all, but he tries so hard for me. He’s awesome when we get in the ring. He’s the exact same horse here as he is at home — he’s the same everywhere and super honest, it makes riding him very enjoyable.”

Natalie Pai
On Her Ride:
“My horse is a bit more experienced than I am. I’ve had him for a little more than a year now. Today, I missed both sets of changes, I have trouble counting them, but he always tries so hard for me — I just have to learn to count better.”

On Competing on the US Team:
“It’s really awesome being able to be on the U.S. team and it’s been a lot of fun so far. I hope to continue to have more fun in the future!”