by US Equestrian Communications Department

Lexington, Ky. – US Equestrian is pleased to announce the list of athletes who will represent the NetJets® U.S. Jumping Team at the Longines FEI Jumping Nations Cup™ Final CSIO, hosted from October 3-6, at Real Club de Polo Barcelona, in Barcelona, Spain, as well as athletes competing for the United States at the FEI Jumping Youth Nations Cup Final CSIOY from September 26-29, at SenTower Park in Opglabbeek, Belgium.

The accomplished group of elite athletes nominated to the NetJets U.S. Jumping Team will be tasked with producing an influential result for the United States in Barcelona and are anticipated to be strong contenders for a prominent podium finish. Chef d’Equipe Robert Ridland will lead the team’s efforts at the celebrated event, as they look to improve upon a bronze-medal finish earlier this year at the Lima 2019 Pan American Games.

“I’m really excited about this team. Certainly on paper, this is a great team and is a very interesting mix of athletes. We have two riders from the West Coast and two from the East Coast, with Chloe Reid as our reserve,” said Chef d’Equipe Robert Ridland. “There are two riders in the group in their early twenties with Eve and Chloe, and then more senior members with Laura, McLain, and Richard, which I think is important in the team structure.It’s a fun mix of athletes and this is going to be a very competitive effort for us.” 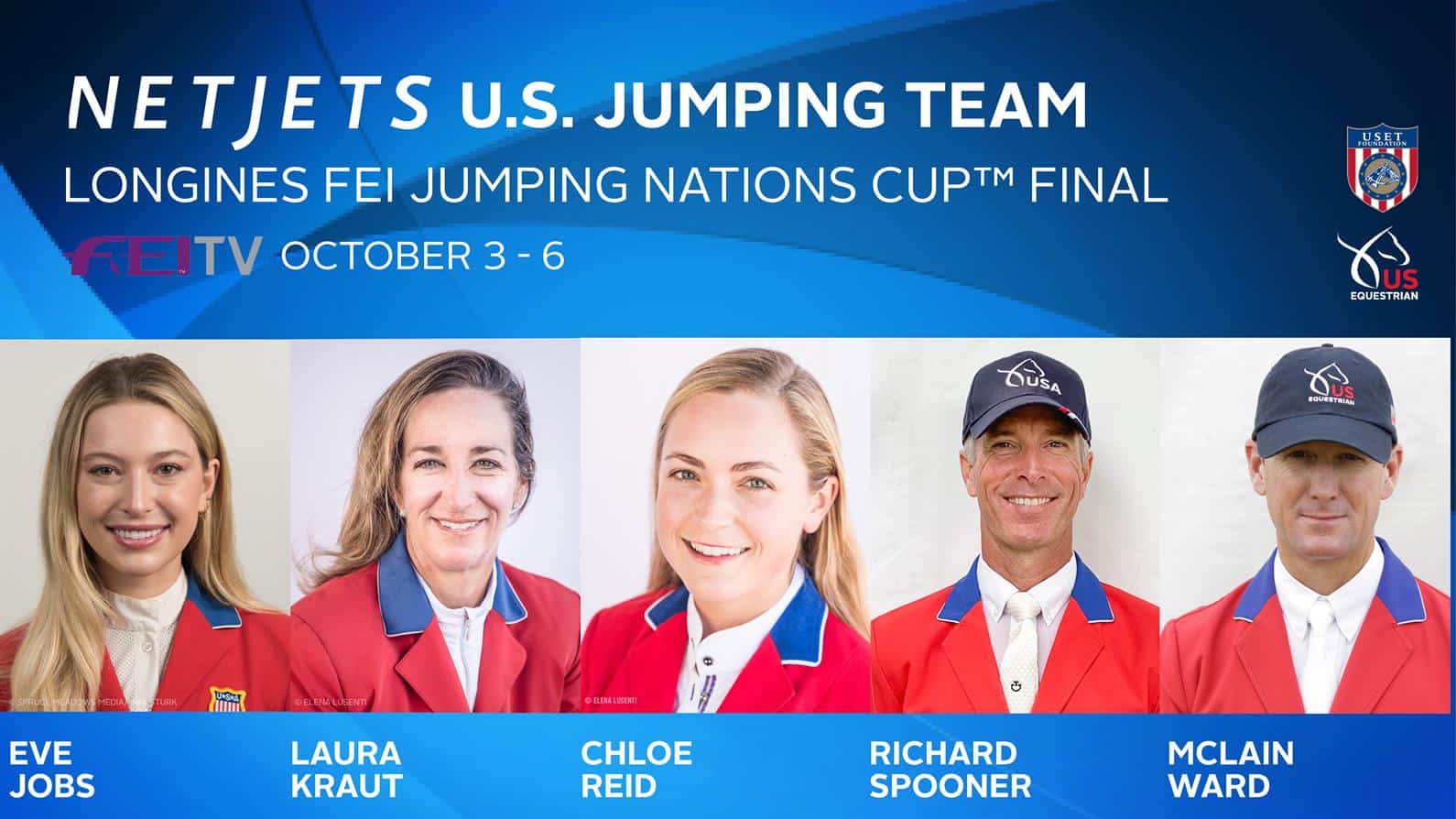 *Nations Cup Final horses will be announced at later date.

The FEI Youth Jumping Nations Cup Final CSIOY is modeled after the Longines FEI Jumping Nations Cup™ Final and prepares up and coming athletes for the demands of international team competition, while fostering team unity and national pride.

Under the knowledgeable guidance of Chef d’Equipe Anne Kursinski, U.S. Young Rider teams have consistently produced impressive results this year, both at home and aboard, securing gold medals at the FEI Jumping Nations Cup CSIOY in Wellington, Fla., and at the FEI Jumping Nations Cup Hagen CSIOY. The team will aim to replicate those results on a competitive international stage in Opglabbeek.

The U.S. qualified a team for the FEI Youth Nations Cup Final as a result of Zone 10’s second-place finish in the Young Rider Team Competition at the Adequan® FEI North American Youth Championships presented by Gotham North (NAYC) in August, a key developmental event for the U.S. Jumping Program and its youth athletes. Two of the five members selected to the FEI Youth Nations Cup Final team secured an individual-podium finish in the Young Rider division at NAYC, while the three additional combinations were appointed through discretionary selection.

“I think heading into the competition, we have an outstanding team. I’m really excited about the group of horses and riders we have going to this championship. Their experience, their performances at NAYC, and finishing on the podium there are testaments to how they’ve earned their way here,” said Chef d’Equipe Anne Kursinski. “I think we should have an excellent finish, but the most wonderful thing is it is head-to-head competition with European teams who have the same caliber riders. There’s nothing like riding on an international Nations Cup team, representing your country. Just that experience will take them very, very far. I’m really optimistic we will have great performances from this group.”

The following athletes will represent the U.S. in the FEI Jumping Youth Nations Cup Final CSIOY: 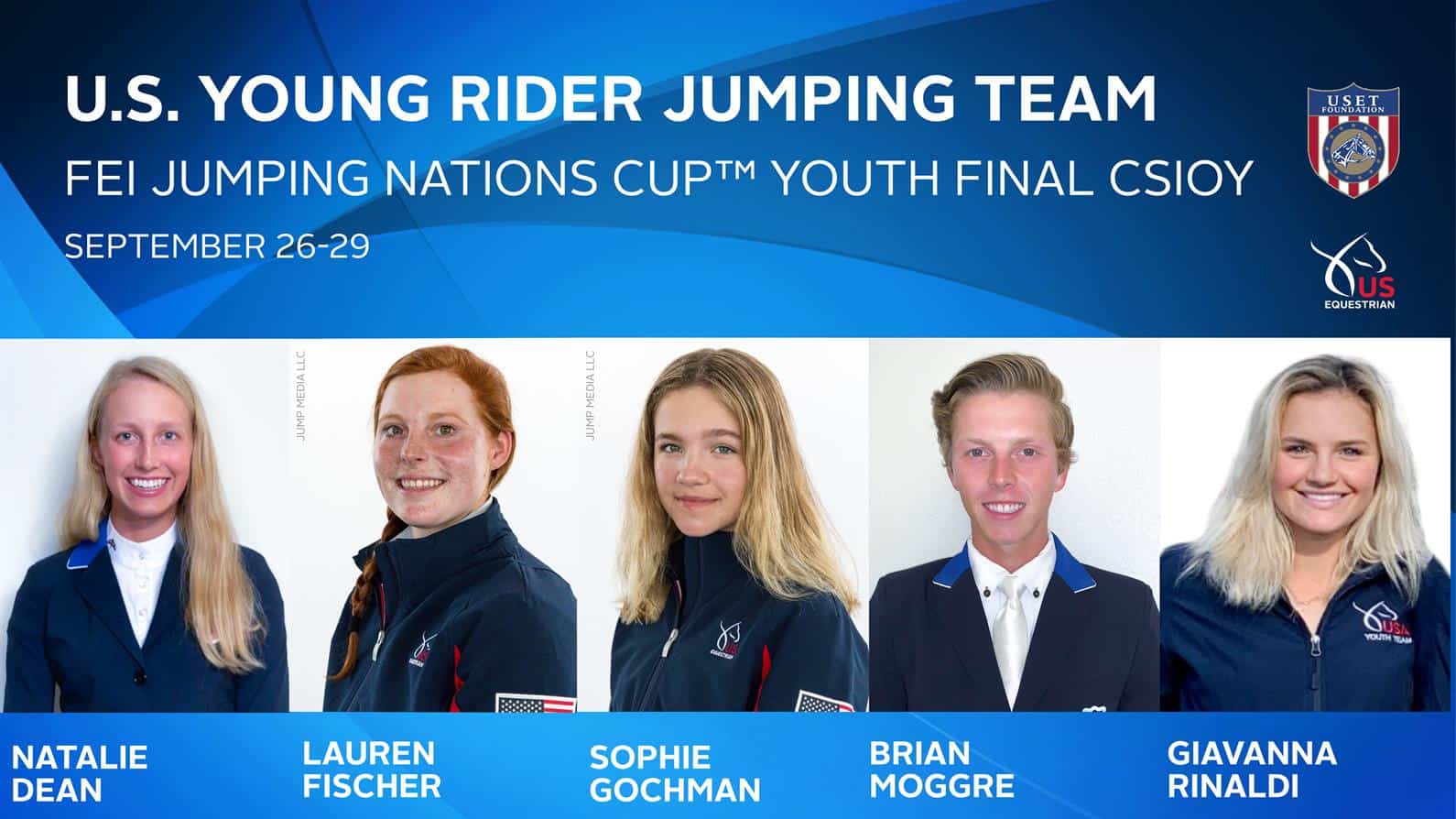