Jessica Springsteen and Don Juan van de Donkhoeve were the first pair to test the Santiago Varela (ESP) 1.65m track under the lights, crossing through the finish in 87.15 seconds and an unfortunate four faults. Kent Farrington and Gazelle were the second combination out for the team and just barely rubbed the first rail of last double to finish with a time of 88.57 seconds and an additional four faults added to their score. Laura Kraut and Baloutinue rounded out the combinations for the U.S. Jumping Team and completed the track with eight faults in 85.23 seconds.

Springsteen (Colts Neck, N.J.) and Don Juan van de Donkhoeve, a 12-year-old Belgian Warmblood stallion owned by Stone Hill Farm, made their Olympic debut for the U.S. Jumping Team, and impressed in their trip around the beautifully built track. Springsteen felt the pressure of being the first combination out for the U.S. and delivered with a strong start to their week of competition ahead.

“My horse jumped unbelievable,” said Springsteen. “I couldn’t be happier with him. When I walked that line, I thought that would ride a little bit more up, but my horse has such a big stride, and he jumped the wall very forward, so I just think I was a little bit quieter there but all-in-all I’m thrilled with the round and I’m excited for the rest of the week.”

Farrington (Wellington, Fla.) and Gazelle, one of the most notable and successful combinations in the world, looked formidable as they tackled the course, but one uncharacteristic rail kept them out of the qualifying for the Individual Final. Gazelle, a 15-year-old Belgian Warmblood mare owned by Robin Parsky and Kent Farrington, is a seasoned competitor at the international level and now adds an Olympic Games to her long list of accomplishments. Farrington was disappointed with the score but is ready to game plan with the team for Friday’s competition.

“A harsh reality of our sport is that you have one rail down and you’re out. The new format here being what it is, is that this is the only qualifier for the individual final and is all or nothing and unfortunately for the American team right now it’s nothing, so just a tough night for us,” said Farrington. “Any horse can have a rail down and it wasn’t the right day to have one down, so it was costly. We’ll go back as a team and regroup with a plan and look forward to doing better later this week.”

As the most recent partnership of the team combinations, Laura Kraut (Royal Palm Beach, Fla.) and Baloutinue, an 11-year-old Hanoverian gelding owned by St. Bride’s Farm, faced their biggest track together so far this evening and the energetic and nimble gelding looked fit and ready for the rest of the week ahead.

“I was really pleased with three quarters of the course. I thought my horse jumped fantastic. He was focused and he stuck right with the plan that I wanted. I wouldn’t say that it actually went wrong; I got the jump into the wall that I wanted, which led me into the four and he had an uncharacteristic touch of a back pole,” explained Kraut. “I lost a tiny bit of concentration to the last and didn’t fight as much as I should have, and he barely touched that. I’m not disappointed in him at all, just disappointed with the score.”

The team’s Chef d’Equipe Robert Ridland discussed his analysis of tonight’s track and what he expects in the days to come for the Individual Final and the Jumping Team Qualifier and Team Finals competitions, which will be the focus for the next two days.

“The strategy was to go clean, which we didn’t do, but all along we’ve been very aware that this is a four-day process and the horses jumped very well tonight and the riders rode well. It just wasn’t our night, but the flip side is we’ll have fresher horses on Friday night and the course designer, Santiago, is definitely going to step things up tomorrow,” said Ridland. “This wasn’t our plan, but we’ll play it to our advantage to some degree and I think we’re in good shape for Friday, though it’s obviously disappointing to not be in contention for an individual medal.” 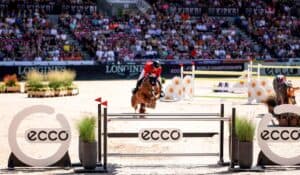 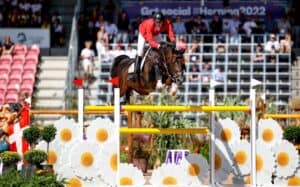 NetJets U.S. Jumping Team to Start Fifteenth for Round I of Team Competition Tomorrow After Speed Round Sets Stage 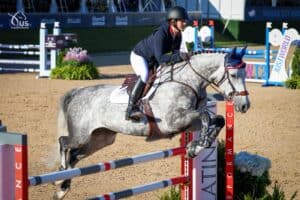