Riding in her third Paralympic Games, Hart (Wellington, Fla.) performed a solid test aboard Romani, a 2002 Danish Warmblood mare. The pair showed good connection throughout the test, scoring consistently well on its collective marks and executing beautifully at the working trot and in the serpentine to place fifth in the class. The Grade II Team test featured 14 athletes from 11 nations with less than one percentage point separating the top four placing combinations.

“I was happy with how I rode and the feel that Romani gave me,” said Hart. “She is the best horse I have ever sat on and it is a privilege to ride her and represent our country. I was slightly disappointed in the score, but in saying that, this is the highest I have ever scored at a Paralympic Games. I want to thank my amazing support system for getting me to this point. Having Todd Flettrich, Margaret Duprey, and Fernando Ortega here with me is amazing. It takes a village to get here and I am thankful for everyone here and everyone at home. I am thrilled to be in the top five heading into our Individual test on Thursday.”

“I was very happy with Lance; it was another great ride,” said Peavy. “He came in and did everything I asked. I could not be happier with him and what he has given me. I was happy with the results, it is our first Games and I am very excited to be where we are at.”

Competing tomorrow for Team USA will be Sydney Collier in the Grade Ib Individual test. 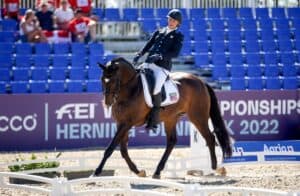