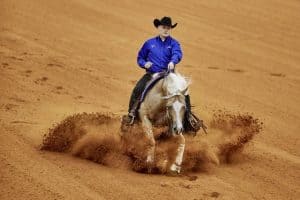 Reiners thrilled the fans in Tryon as 63 horse-and-rider combinations representing 20 National Federations laid down impressive runs paid back by the judges with great scores. The Team Competition counted 12 full teams and, with a phenomenal 681 composite, Team USA clinched its fifth consecutive team gold medal. First to enter the pen on home turf was Casey Deary riding Hilldale Farm’s Heavy Duty Chex; the pair marked a 223.5. With five horses left to show in the first section, Team USA’s youngest rider, 18-year-old Cade McCutcheon, laid down an impressive performance aboard Custom Made Gun, a 7-year-old stallion owned by his grandparents, Tim and Colleen McQuay. Once he closed his run, a 229 appeared on the score board.
The talented young rider set the bar and his score held until the very end. “I’ve been riding this horse since he was a 4-year-old and he keeps getting better every year,” said an enthused McCutcheon.

“This is the highest score I have ever posted and being able to get this done representing my country is truly an honor!”

In the second section, team members Daniel Huss riding MS Dreamy for Frederick Christen and Jordan Larson aboard Arc Gunnabeabigstar owned by HDC Quarter Horses LLC performed to a 226.5 and 225.5 respectively, firmly placing Team USA on the highest step of the podium. “All these riders did a phenomenal job and what took place behind the scenes is probably the most meaningful part for me,” said Team USA’s historical coach, Jeff Petska who was quick to credit the work of the team behind the scene. “A special thank you goes to our team vet, Dr. Newcombe, and all our grooms.”
It was a three-peat for Team Belgium as anchor rider Bernard Fonck sealed the silver medal for his team by performing a great pattern #8 aboard What A Wave. The stallion once again showed off his potential and the duo closed with a 226.5 score. “This horse is simply amazing,” said Fonck. “He is an outstanding athlete who always gives me his heart and today, once again, gave me all he had.” Fonck’s wife, Ann, had ridden Made In Walla — owned by Sabine Lisec – to a 225.5 and Dries Verschuren, riding his own Smart N Sparkin, had closed with a 219.5. The final composite for the Belgians, who also saw Cira Baeck and Piet Mesdagh’s Gunners Snappy Chic, was a 671.5.
With a final score of 666.5, Team Germany claimed the bronze medal thanks to Grischa Ludwig and Ruf Lil Diamond, Markus Suechling and Spotlight Charly, Robin Schoeller and Wimpy Kaweah and Julia Schumacher riding Coeurs Little Tyke. A half-a-point away from the podium was Team Austria.
The Team Competition and the first qualifier of the Individual Competition kept reining fans glued to their seats. The top 15 riders will automatically will make their way to the Individual Competition vying for the prestigious FEI medals. The top five riders from the second qualifier which will be held on Thursday, will also earn their chance to slide to the podium.
Click here for the list of results.