Ridland was thrilled with the team’s performance and commented that the results went according to plan in the second round, which featured three clear efforts from Springsteen, Engle, and Kraut. The added pressure of performing well at the only Longines FEI Jumping Nations Cup competition hosted on U.S. soil certainly increases expectations, and Ridland noted that his team handled the difficult task at hand with an unwavering determination.

“Our home Nations Cup is special, as it is for any country, and it’s also a hard one for everyone. These horses aren’t in mid-season form yet, but the field of play, when you looked at the teams last night, it would have been just as easy to be fifth. It was really great jumping and it was a great course,” said Ridland, as he discussed his team’s performance in their first Nations Cup competition of the season. “This is what the sport is about. This is the pinnacle of the sport, to me, the Nations Cup.” 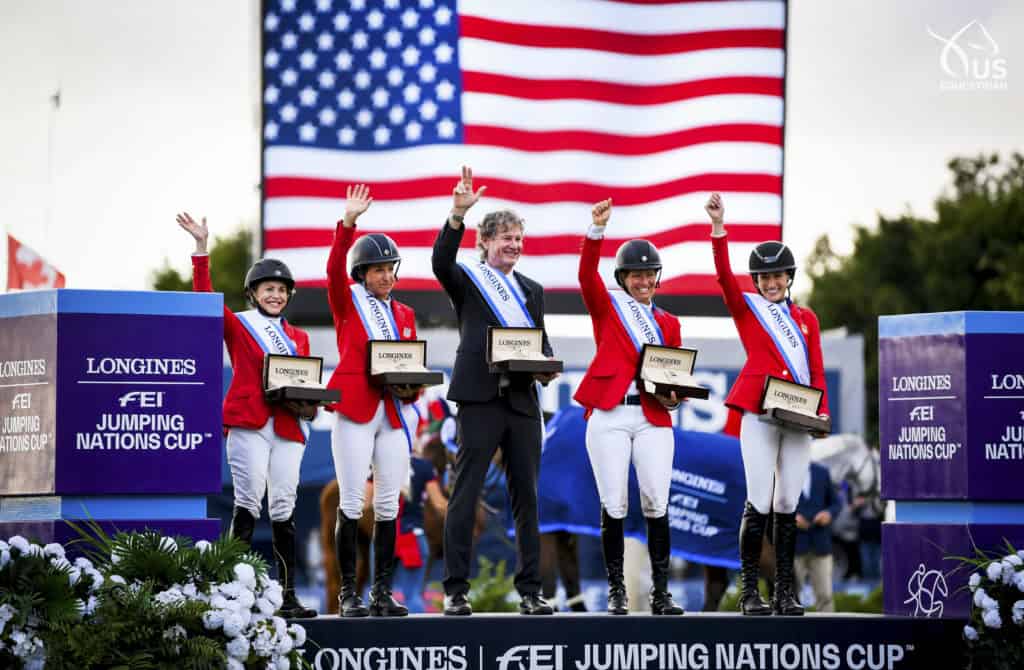 Springsteen aboard RMF Zecilie, a 13-year-old Holsteiner mare owned by Rushy Marsh Farm, LLC, were the first combination to test the track designed by Alan Wade (IRL) and finished with just four faults in their first tour around the course, followed by an impressive clear effort in the second round.

“In the second round, I didn’t want to change my plan too much and just felt like I needed bit more space back to that vertical, but other than that she jumped amazing in both rounds, so I was thrilled with her,” said Springsteen. “It was really a team effort today and you always feel good when you know you have Margie, Laura, and Beezie coming behind you, so that always gives you good confidence.”

Next in the order aboard her veteran partner, Royce, a 16-year-old Oldenburg stallion owned by Gladewind Partners LLC, was Margie Engle, who added four faults in their initial round, before returning to secure a valiant clear effort and keep the team positioned well on only eight faults with Kraut and Madden left in the order.

“Jessica [Springsteen] went and had a fantastic round and was clean, so I knew that we still had to fight to get clear rounds,” said Engle. “There’s a lot of change that usually happens during the second round. I made sure when I went to the oxer this time to get a little bit straighter to it. He actually felt great in both rounds and the approach I had to that oxer was a little better. He felt great and all of my teammates were super. It’s a nice feeling to have this strong of a team.”

Kraut and her trusted partner Confu, a 13-year-old Holsteiner gelding owned by St. Bride’s Farm, produced only one of four double clear efforts of the day. Their consistency secured the team’s final total of eight faults, which allowed the anchor combination of Beezie Madden and Darry Lou to forgo their need to contest the second round.

“He was fantastic today and that being said, it is also hard not to be too over-confident when I have a team like this with great riders and great horses. It’s the most confident I’ve felt in a long time – it was great,” commented Kraut.

To make for a truly exhilarating finish, the team representing Great Britain also finished on eight faults following the second round, forcing a two-rider jump-off, which saw Beezie Madden and Alexandra Thornton go head-to-head to determine the winning team. Madden and Darry Lou, a 12-year-old KWPN stallion owned by Abigail Wexner, crossed through the timers in 33.11 seconds as the first pair to jump-off, besting Thornton’s time of 36.34 seconds.

“I for sure didn’t want to leave the door too open for her to be faster than me. I think my horse actually rises to the occasion when I call on him and put pressure on. Right from the first jumps in the schooling area, he was already jumping better than in the first round,” commented Madden. “He wanted to play a little after fence one, and I had to say, ‘We’ve got to get down to business,’ and he really came through.”

Stay up to date on the U.S. Jumping teams by following USA Jumping on Facebook and Instagram. Use #USAJumping, #FEINationsCup, and #PBM2020.

The USEF International High Performance Programs are generously supported by the USET Foundation, USOPC, and USEF Sponsors and Members.