Tryon, N.C. – For the first time in history, the Adequan USEA Gold Cup Final was run with cross-country as the last phase. When severe weather hit the USEA American Eventing Championships (AEC) presented by Land Rover and Nutrena ® in Mill Spring, N.C. earlier in the week, the cross-country phase had to be postponed from Friday afternoon to Sunday morning due to the emergency vehicle access and allowing the footing time to dry out. This put a new twist on the Final as the top 10 pairs ran in reverse order of standing on cross-country. 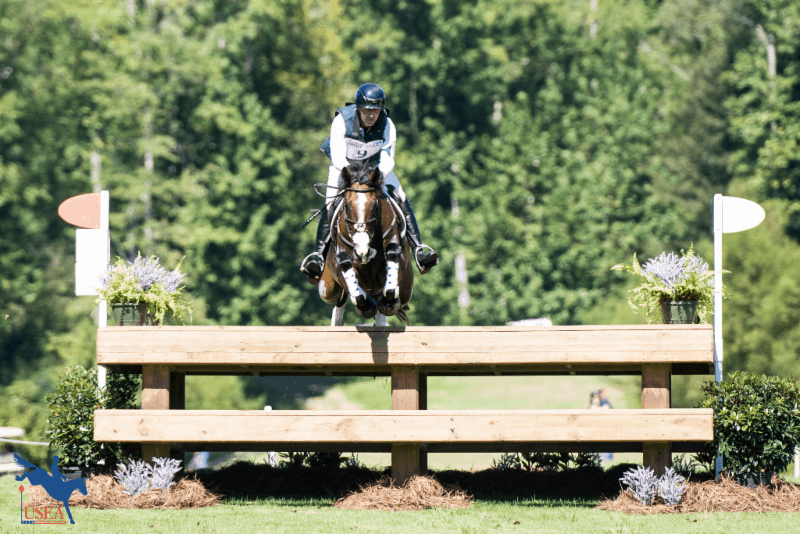 Following a double clear show jumping round under the lights in the George Morris Arena at the Tryon International Equestrian Center (TIEC) last night, Marilyn Little (Frederick, Md.) and RF Scandalous were still sitting on top of the leaderboard and as a result were the last to set out on cross-country. When Little fell from the 12-year-old Oldenburg mare (Carry Gold x Richardia) owned by Jacqueline Mars, Robin Parsky, and Phoebe & Michael Manders, at fence 16, The Stick Pile, the door was opened for a new Champion.

Matthew Brown (Kennett Square, Pa.) was sitting in fifth with BCF Belicoso, an 11-year-old Irish Sport Horse (Lux Z x Catcher Berezina) owned by the Blossom Creek Foundation before leaving the start box on cross-country. However, time was proving to be tight on Capt. Mark Phillips’ cross-country track which ran at the White Oak property, so when Brown earned one of only three double clear he climbed up the ranks to the top spot, and officially earned the National Open Horse Trials Championship for the Jack Le Goff Trophy and Adequan USEA Gold Cup Championship and titles.

“At the beginning of the week I joked with my wife [Cecily] that riding [Belicoso] is like riding an electric golf cart that’s slightly running out of batteries all the time – he doesn’t have much blood to him, but he always is willing to go when I ask him to, and he showed me the same things in the show jumping and in cross-country,” said Brown. 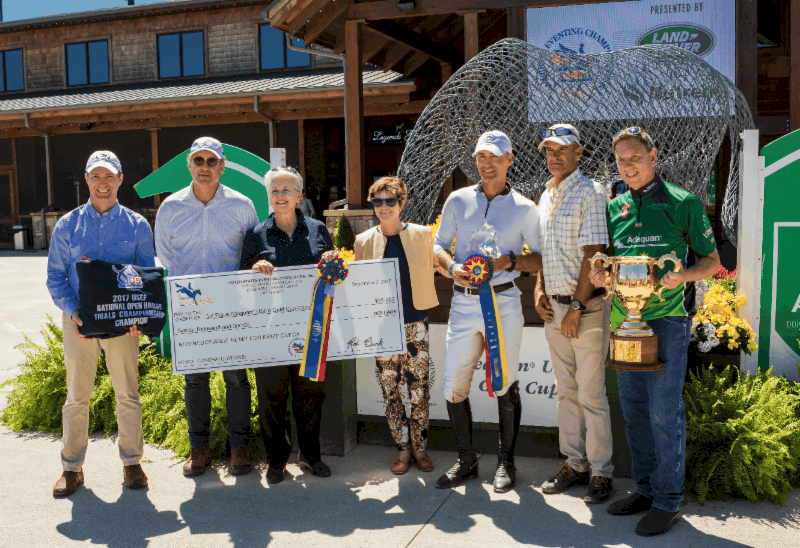 Brown had been eventing on the West Coast for decades, but decided to move east a few years ago in order to be based in the mecca of the sport. “The thing I’ve found really great about being on the East Coast after having some success on the West Coast, in order to do well at a competition like this with Doug [Payne], Phillip [Dutton], Jennie [Brannigan], Marilyn [Little] and others, you really have to be on the inside line and not give away those little points, so being back here is definitely pushing me and pushing the horses. I felt like Belicoso really stepped up in all three phases and is constantly improving, so I’m really happy with him.”

Belicoso was the alternate for the 2015 Pan American Games and after moving up to the three-star level he sustained an injury, so Brown said he spent the last year coming back from an injury and he is taking it slow. In addition, Brown is in a transition period with his owners Bob and Valerie Fish of Blossom Creek Farm who also own his top mount, Super Socks BCF.

“This year actually we were in a position with our very generous owners Bob and Valerie having to finance and funnel more funds towards Super Socks, and we were actually in the position of possibly having to sell Belicoso, so Cecily and I decided that we were going to do whatever it took to try to keep him because we really believe in the horse as Bob and Valerie believe in the horse.”

For his win in the Adequan USEA Gold Cup Series, Brown took home $20,000, the lionshare of the $40,000 prize money. He was also the recipient of the Jack Le Goff trophy as winner of the National Open Horse Trials Championship. 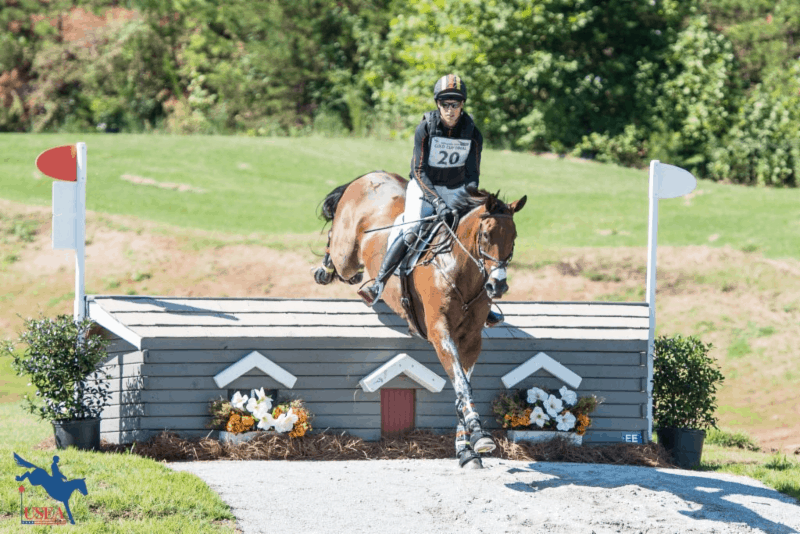 It was a bit of déjà vu for Doug Payne (Aiken, S.C.) and his stalwart partner, Vandiver. The 13-year-old Trakehner gelding (Windfall II x Visions of Grandeur) owned by Debi Crawley, Doug and Jessica Payne, has a bit of “always the bridesmaid, never the bride” syndrome. The pair came in second last year and second at The Fork CIC3* this spring. Last year, Mark Belissimo, Managing Partner of Tryon Equestrian Partners, gave Payne the pole that cost him the win and to continue that tradition, Bellissimo presented Payne with a dressage marker as he lost by a mere .2 to Brown this year.

“Dressage was good but it’s still coming,” explained Payne. “Where he’s lacked in the past is he just needs a little more engagement and more power, and so we had a couple little bobbles but in the grand scheme of things it was well on the right path. Looking to the future, I think it’s very bright. Jumping was good last night, and then today cross-country was excellent. He’s like a seeing-eye dog . . . you just kind of sit there and enjoy it. I was probably five seconds down when we went across the first bridge, and then the course opens up a little bit there, and his stride is absolutely massive, so I got to the last fence and had 20-some odd seconds, so I just coasted across the line. He was flying.”

Vandiver is flying out to compete at the Blenheim CCI3* in England on Wednesday and the AEC was his last run before his overseas debut. “It’s a perfect prep for the next two weeks. I’m excited to see [Blenheim] – my wife and my sister have competed there, but I haven’t been yet.” 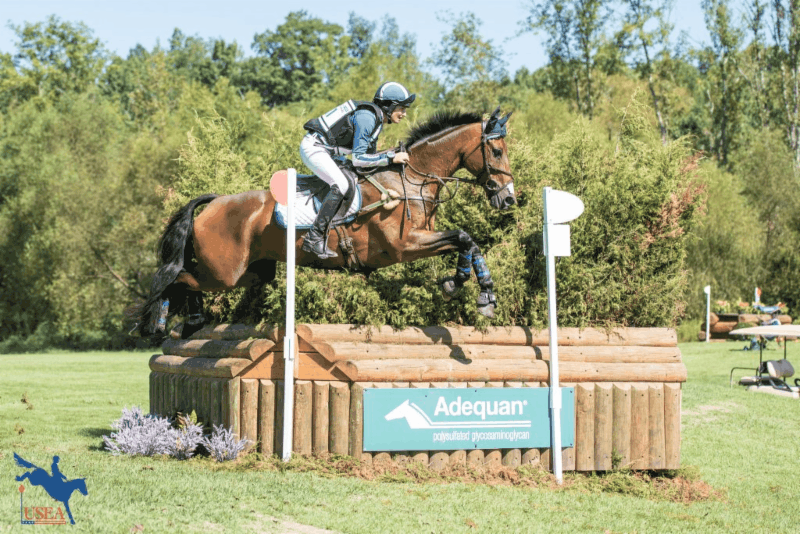 Jennie Brannigan (Reddick, Fla.) and her longtime partner, Cambalda, accrued 4.8 time penalties on cross-country to drop down to third place. While Brannigan has had enormous success this week at the AEC, she had a disadvantage today because she broke her hand last night after jamming it into the neck of Nina Gardner’s 15-year-old Irish Sport Horse (Balda Beau x Cathys Lady) during show jump warm-up.

The Adequan USEA Gold Cup Series is a longstanding program of the USEA. Several years ago the Final was moved to the AEC and the Series has flourished at TIEC for the last two years. “We’ve really been blessed to have started the Adequan Gold Cup Series with the USEA, and to see it evolve through all types of formats,” said Allyn Mann of Adequan. “I think what we saw today was the accumulation of what really defines the championship – to have the horse and rider go out there and perform. . . when you look at the difference between first and second, it’s amazing that these horses and riders do what they do, and then it’s just a small difference between first and second or even first through fifth. I love the sport of eventing – it really defines courage and athleticism and fearlessness.”

This is the second year of the AEC at TIEC and it grew into a world-class competition in just a short time. “We just love our partnership with the USEA, and hosting the AECs for the second year now is just a real honor,” said Sharon Decker, COO of Tryon Resort and Tryon International Equestrian Center. “This is one of our most special weeks of the entire season … we love eventing, and to see our advanced group today on our FEI World Equestrian Games™ course is very exciting. I was standing out there today and thinking about a year from now, we’ll have some of the same riders out there along with many from around the world. We’re thrilled with how the course held up, even in the midst of a tremendous amount of rain, and very pleased with how it was prepared for today’s competition, as well as how the field held up and how the course performed over the last two days in the middle of all the rain. So we’re just grateful for a magnificent team here that makes things happen but so thankful for the relationship we have with USEA and our partnership going forward. I want to thank Allyn and the good folks at Adequan and our friends at Land Rover and Nutrena that have made this event possible.”