Omaha, Neb. – April 1, 2017 – It was Germany’s Isabell Werth who topped the podium and doused the second and third place riders, Laura Graves and Carl Hester, with champagne after the thrilling Grand Prix Freestyle at the FEI World Cup Dressage Finals. The world’s #1 ranked rider seized her third World Cup title in her career at the CenturyLink Center in Omaha aboard Weihegold OLD.

Though fan favorite Laura Graves’ bid to bring home the title to the United States fell just short, she earned a personal best score of 85.307 percent on her 15-year-old KWPN gelding Verdades and finished in second. She tweaked part of the choreography by adding a piaffe fan to an extended trot on the final centerline to increase the degree of difficulty.

“It’s very exciting and hard to believe actually — personal best!” Graves said. “I could just feel the crowd smiling the whole time, and that is something we try to create with every freestyle. You want people to be on the edge of their chair and wanting to applaud for you. I feel like we achieved that today and my horse really thrived on it.

“By the end of my ride I was super excited! I couldn’t even hear my music once we broke into that extended trot, so I kind of had to guess going into that final halt,” Graves laughed. “Knowing that the crowd approves, especially in your home country, is amazing.

“I didn’t even realize how badly I wanted to win,” Graves continued. “I’m very competitive. We tried to give it a run for the money, but when I saw Isabell’s technical score go so high and they cut to a shot of the World Cup, I just thought, ‘oh I want that so bad.’ To be honest, I was a little disappointed knowing that I had come in second, but coming second to Isabell, who is number one in the world and has done this with so many horses, still feels an awful lot like winning. You don’t have to have first place to have that feeling. It’s my first time on the podium as an individual, and I won’t forget it for sure — Isabell knows how to make it a party!” 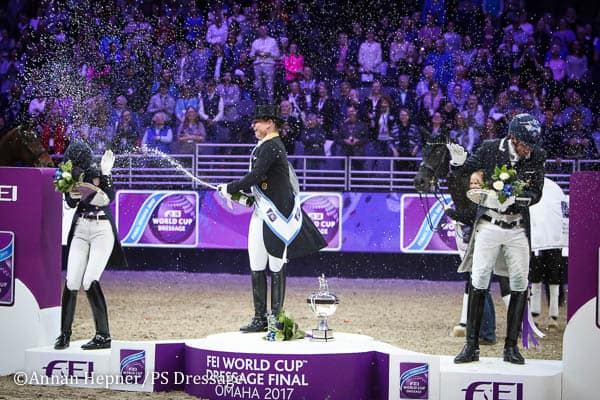 The president of the ground jury, Anne Gribbons, was pleased by the level of competition brought to the Finals in Omaha. “The precision that each one rides with is wonderful,” Gribbons said. “All these riders have such a relationship with their horses and that is what comes out. We had a fantastic group this time — the whole field was a real challenge to us judges.

“Verdades and Weihegold OLD are enormously different — in their build, size, and their talents,” Gribbons explained. “One has immense athletic power with impulsion, engagement and excitement, while the other one is like a ballet dancer — light and a master of collection. Comparing the two is very challenging. You have to appreciate Verdades’ power and brilliance, and in Weihegold you have to appreciate the art.

“I don’t think Laura was lacking in anything today and that she was pulling it all out,” Gribbons continued. “Little by little, I think she will probably hit a 90 percent. Though the horse is 15-years-old, he has not been used up and I think he can get even better.”

Fellow American riders, Steffen Peters and Kasey-Perry Glass were thrilled with their rides on home turf. The first of the final group of riders to compete, Kasey Perry-Glass rode her 14-year-old Danish Warmblood gelding, Goerklintgaards Dublet to a seventh place finish with a 77.068 percent.

“I was very happy — the freestyle was a lot more fluid than my Grand Prix,” Perry-Glass said. “I felt like he was a little more together and really focusing on my aids and what I really wanted him to do. I just really loved the piaffe/passage. It’s so much fun to ride and especially with such a big atmosphere he gets a little more pumped up. He’s brilliant as it is, but it just makes it that much better for him.

“I went into it with a positive attitude wanting to keep it positive for him, and I’m really happy that I achieved that,” she continued. “I learned some things about myself and him. It’s an honor to represent our country.”

American Steffen Peters was thrilled with his mount, Rosamunde, a 10-year-old Rheinlander mare, for her solid freestyle performance, which put them in ninth place with a 75.879 percent.

“I’m super pleased with her,” Peters explained. “It was a great freestyle for Rosie — she tried really hard. For a young Grand Prix horse playing for the first time with the big boys and girls, this was awesome. I was hoping the judges would score it a little better.

“It was the most incredible thing when the crowd started clapping during her trot half-passes and during her extension,” Peters continued. “There’s nowhere else in the world where the fan base is like the United States — the way the crowd reacted when you got done, you just don’t see that anywhere else in the world. I wish I could shake everyone’s hand in there because it’s such a special feeling.”