Barcelona, Spain – Eight nations took to the main arena of the Real Club de Polo de Barcelona on Saturday night for the last round of the Furusiyya FEI Nations Cup Jumping Final. The teams faced a highly difficult track designed by Santiago Varela (ESP) as they competed for top honors at CSIO Barcelona. Led by Chef d’Equipe Robert Ridland, the Hermès U.S. Show Jumping Team of Lauren Hough, Reed Kessler, Laura Kraut, and Beezie Madden had a strong performance in a tough round against some of the world’s best combinations to finish in fourth place on 12 faults.

“It was a very difficult, but brilliant course. It was exactly what you would expect at the Final; it’s the highest level of sport with great countries competing here. We knew it was going to be tough when we walked it,” explained Ridland. “We are pretty pleased with our performance. Obviously we always hope to win but we were only one rail from second. It was very close for all teams.” 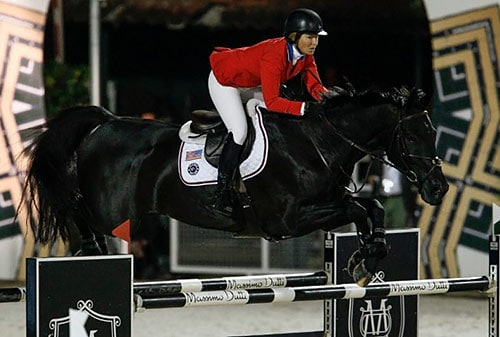 Kraut (Royal Palm Beach, Fla.) and the Evita Group’s Nouvelle, a 2004 KWPN mare, were the pathfinders for the U.S. team over the demanding track, knocking rails at the Caixa Bank oxer at nine and the B element of the Passeig de Gràcia double at 11 for an eight-fault round. Next to go was Kessler (Lexington, Ky.) and Cylana, Kessler Show Stables, LLC’s 2002 Belgian Warmblood mare, who joined the team for the final round. They also collected eight faults with rails at fences nine and 11A. With the pressure on, Hough (Wellington, Fla.) and The Ohlala Group’s Ohlala, a 2004 Swedish Warmblood mare, went into the ring and had an unfortunate rail at the Freixenet vertical at three but finished strongly over the rest of the course for a four-fault round. Last to go for the U.S. team was Madden (Cazenovia, N.Y.) and Cortes ‘C’, Abigail Wexner’s 2002 Belgium Warmblood gelding, needing a clear round to finish close to the top of the leaderboard. The pair delivered, posting one of only seven clear rounds in the conclusion of the Final. Their round put the U.S. team in fourth place.

“It was difficult for sure,” Madden said of the course. “It was big, technical, and kind of tricky in some places, but I couldn’t be more pleased with my horse. He’s been super all year. His owner, Abigail Wexner, is a huge supporter, and it was neat to be able to share it with her, and it was also good for my whole team.”

The Final format allows five riders to compete for each nation, as a substitution is allowed for the second round. Lucy Davis (Los Angeles, Calif.) and Barron, Old Oak Farm’s 2004 Belgian Warmblood gelding, competed in the first round of the Final on Thursday, while Kessler rode her mount Cylana in the final round. Ridland added that, “We did what we have done for all three years of the Final and used all five riders. All five riders had solid performances that contributed to our overall placing.”

Belgium won the Furusiyya FEI Nations Cup Jumping Final on a team score of four faults. Great Britain and The Netherlands both finished with eight faults, but Great Britain finished with a total team time of 223.14 while The Netherlands had a time of 226.80, thus determining their respective second and third placings. The U.S. was in a three-way tie for fourth with Ireland and Germany on 12 faults but had the lowest total team time of 219.61 to claim fourth place.

Find out more information about CSIO Barcelona and view results.

The USEF International High Performance Programs are generously supported by the USET Foundation, USOC, and USEF Sponsors and Members. Without the support of these organizations and individuals, it would not be possible to support our athletes. The USEF is especially grateful to individuals who give generously of their time and money to support the equestrian teams.