In a highlight effort of the weekend, Trunnell and Dolton, who are currently the top ranked para dressage combination in the world, executed a clean and relaxed test in the FEI Para Dressage Individual Test on Saturday evening to receive an 83.334% from the judging panel – the highest score ever recorded in the FEI Para Individual Test in any grade.

“I was really looking for consistency this week. It’s too early for us to peak right now, so I said to our athletes, ‘Let’s be safe and make sure we have some decent scores,’” said Assouline. “Some of them performed higher than expected, but also it’s important to keep in mind that some of them performed on the safer-side, so given all of those factors, the scores were just excellent. We have something very special happening right now within our program.”

Team competition began on Friday, March 12, and featured combinations testing the FEI Para Team Test with Trunnell guiding Dolton to the best score of the evening, an 80.119% in Grade I. De Lavalette and Clarc placed second in Grade II with a 66.869%, while Hart piloted El Corona Texel to a 75.784% and second place in Grade III. Shoemaker and Solitaer 40 recorded a 75.292%, a personal best for the combination in the Para Team Test in Grade IV.

The team returned on Saturday evening to compete in the FEI Para Individual Test held under the lights at AGDF, creating a championship-like atmosphere to determine final team placings. Trunnell and Dolton wowed with record breaking mark of 83.334% in the first test of the evening, setting a strong tone for the three remaining combinations. De Lavalette and Clarc earned a 69.461% to win Grade II competition before Hart and El Corona Texel received a 71.618% in Grade III competition to help build the overall team score. Shoemaker and Solitaer 40 earned their second career-high score of the weekend with a 74.390% in Grade IV to round out the team’s performance.

“It still remains that we have work to be done, particularly in our Freestyles, and there’s still improvements we can make. It is a big challenge because there are not many opportunities to ride and practice the Freestyle, but we’re working on providing more opportunities because that’s what we need to prepare,” continued Assouline. “Overall, I’m very pleased with the week and where we are at the moment as a team.”

US Equestrian extends its gratitude to the United States Para Equestrian Association (USPEA) for their support of the Perrigo CPEDI3* presented by Adequan and Nutrena and their continued efforts to help develop, promote, support, and sustain all USA Para Equestrian athletes competing at regional, national, and international competitions.

Watch competition from the Perrigo CPEDI3* presented by Adequan and Nutrena on-demand on USEF Network. 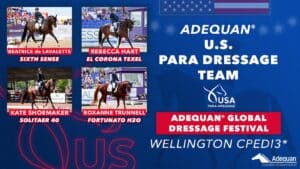