Lexington, Ky. – US Equestrian is pleased to announce the athlete/horse combinations that will represent the United States at the 2021 Longines FEI Endurance World Championship, scheduled to take place May 21-22 at San Rossore, Pisa, Italy.

The following combinations will represent the U.S. Endurance Team and are listed in alphabetical order:

Holly Corcoran (Stroudsburg, Pa.) and Poete, her own 2007 Arabian gelding

The following combinations have been named as alternates to the U.S. Team for the 2021 Longines FEI Endurance World Championship and are listed in ranked order:

Holly Corcoran (Stroudsburg, Pa.) and Poetrie, her own 2011 Arabian mare

Jessica DiCamillo (Las Cruces, N.M.) and her own Just Believe, a 2008 Arabian mare

Competition Information
The Longines FEI Endurance World Championship will consist of a 160-kilometer ride on a closed course at the San Rossore Estate within the Migliarino San Rossore Massaciuccoli Park in Pisa, Italy. The ride will start at 7:00 a.m. local time on May 22, 2021. Learn more about the competition here. 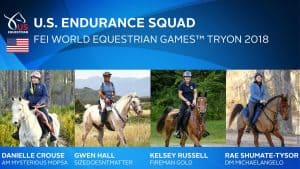