In the only major international championship of the year for U.S. Young Rider and Junior endurance athletes, the 2021 FEI Endurance World Championship was a welcomed opportunity for talented and upcoming youth athletes from the U.S. to test their horsemanship skills against other international youth athletes in a competitive championship environment. The 2021 FEI Endurance World Championship for Young Riders & Juniors saw more than 20 countries comprised of 74 total combinations contest the ride with 38 pairs ultimately passing the final horse inspection to complete the ride. Each horse was required to pass a mandatory veterinary inspection focused on soundness and metabolic recovery rate at the conclusion of each loop to continue forward with the ride, with two checks occurring before combinations set off on their final loop.

Providing a pathway to future senior championships, the U.S. Endurance Team finished all three team combinations, with Shampoe earning 14th place as the highest-placed American and finishing the ride in 6:23:44 with Promissin Gold, a 2013 Arabian mare owned by Valerie Kanavy. Dugan rode Southern Justice, a 2012 gelding owned by Sally Jellison and Dessia Miller, to 32nd place overall, completing their fourth and final loop at 7:27:40. Wert and Dude Free Gold, a 2008 Arabian gelding owned by Valerie Kanavy, took 34th place, completing their ride in 8:01:50.

“It is a privilege and delight to see how these Young Riders and their equine partners rise to the occasion and the thoughtful support of family, friends, crew, and USEF, who all made this outing to the World Championship an experience to treasure and remember,” said Chef d’Equipe Dorion. “A huge thank you to everyone who has helped these Young Riders achieve their goal of competing here.”

This was the first international championship for both Dugan and Wert and the second for Shampoe, with the team producing one of the top results within the program to date and marking an impressive accomplishment for all three athletes, who have worked to qualify for the championship since the 2018 competition season.

“My experience at this championship was better than I could have imagined. With only three U.S. starters we knew we all needed to finish to achieve a team completion. Along with that, we all had our own hopes for individual speeds and placing. The support from USEF was amazing. They allowed us to focus on riding our horses, while USEF and our crew managed everything else,” said Shampoe. “The course was much more challenging than I expected, and the competition was very well organized. Training the three horses together and riding with Charlie and Megan this summer made the team completion icing on the cake.” 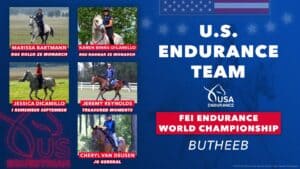 By US Equestrian Communications Department US Equestrian is pleased to announce the athlete/horse combinations that will represent the United States at the 2022 FEI Endurance World Championship, scheduled to take place 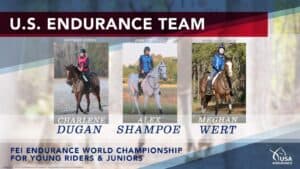 By US Equestrian Communications Department Lexington, Ky. – US Equestrian is pleased to announce the athlete-and-horse combinations that will represent the United States at the 2021 FEI Endurance World Championship for

By US Equestrian Communications Department Lexington, Ky. – US Equestrian is pleased to announce the athlete-and-horse combinations that will represent the United States at the 2021 FEI Endurance World Championship for 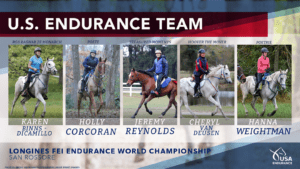 By US Equestrian Communications Department Lexington, Ky. – US Equestrian is pleased to announce the athlete/horse combinations that will represent the United States at the 2021 Longines FEI Endurance World Championship,