Tokyo, Japan – On the second day of FEI Grand Prix competition at Equestrian Park in Tokyo, the U.S. Dressage Team saw its final two pairs help to secure a team start in the FEI Grand Prix Special for Team Medals set to take place on Tuesday, July 27. Adrienne Lyle (Wellington, Fla.) and Salvino were the first team combination to contest the second day of competition in Group D, with the duo earning a 74.876 percent and qualifying for the FEI Grand Prix Freestyle for Individual Medals. Steffen Peters (San Diego, Calif.) and Suppenkasper rounded out the evening, going second-to-last in Group F, and earning a score of 76.196 percent. The team qualified in fourth place overall with 7389.5. total points.

Lyle has had the ride on the impressive 14-year-old Hanoverian stallion owned by Betsy Juliano LLC for nearly six years and the strength of their partnership was on display during their test. With experience as an individual from the London 2012 Olympic Games, Lyle was reflective on her experience in Toyko and the importance of the team environment.

“He has some great talent in the piaffe and passage and unfortunately we had some tension and balance issues got in the way of showing off what he’s really capable of today. I know there’s so much more in there,” commented Lyle. “This is my second Olympics, but everything is a little bit different with COVID, and the format is completely different, so in a lot of ways it’s all very new. We have a wonderful team and everyone is so supportive. We train so hard for this and to get to be here and to think about everyone who starts on this journey and being one of three selected to represent this country is awesome. This whole experience has been wonderful.”

As the team’s Olympic veteran, Peters brought his experience and composure forward to his FEI Grand Prix test with Suppenkasper, a 13-year-old KWPN gelding owned by Four Winds Farm and Akiko Yamazaki. Starting in his fifth Olympic Games, Peters understood the need to give the team a strong performance to secure their team start on Tuesday in a competitive field and delivered with a clean and conservative test.

“It was a good test. It was a bit conservative because we had some trouble spots with the flying changes in the warm-up, so I rode those really carefully, but the rest I rode very forward. We had a super relaxed walk tour, which for Mopsie in an arena like this, to be that relaxed is a wonderful feeling,” said Peters. “I think today I really wanted to go for a clean test and get a decent score, which we did. With a 76 percent, I think that puts us in a really good place going into the Special.”

“It was really important that we put in two solid tests today in order to qualify us for the Grand Prix Special on Tuesday, and after Sabine’s great ride yesterday, Adrienne and Steffen made sure we got the scores we needed to get there,” commented McDonald. “We’ll start with a clean slate in terms of scoring on Tuesday and will begin preparing for what is going to be a very intense competition for team medals.” 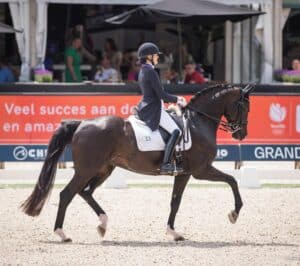 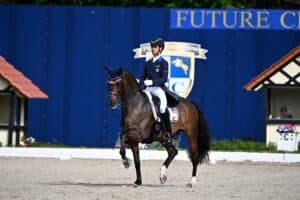 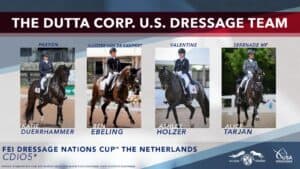 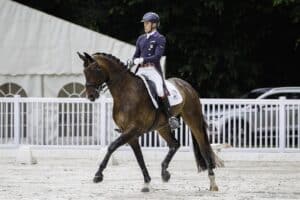 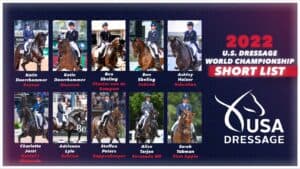