Co Cork, Ireland – With some challenges and a new Olympic format to contend with, The Land Rover U.S. Eventing Team persevered this weekend during the FEI Eventing Nations Cup™ Ireland at the Millstreet International Horse Trials, finishing fifth. Personal bests, injuries, and stellar cross-country efforts made their presence known among the U.S. team, but Buck Davidson, Hallie Coon, and Liz Halliday-Sharp rose to the occasion when the going got tough. 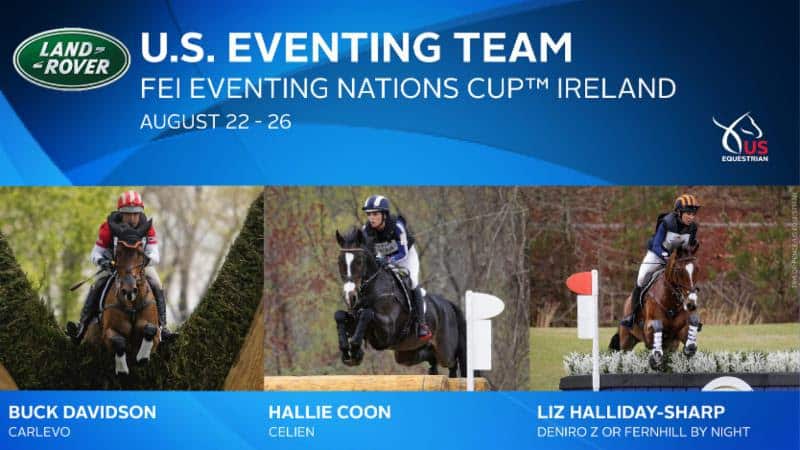 “It was really good to test the new [Olympic] format here at this event,” said U.S. Eventing Technical Advisor and Chef d’Equipe, Erik Duvander. “We had all sorts of different versions of possible questions for future competition and the value of running through that and testing it here has been immensely good. Many people agree that cutting down to three combinations in each team can be okay, however, the rules and thinking around the substitutes do seem to make the sport more complicated and possibly difficult to understand. We had several scenarios over the weekend that proved that. The general feeling is there needs to be more thinking and trial runs if they are going to get this right.”

A successful dressage phase put the Land Rover U.S. Eventing Team in a tie with France on a score of 85.70 for an early lead in the Nations Cup. Davidson (Ocala, Fla.) and Carlevo, Carlevo LLC’s 11-year-old Holsteiner gelding put in a personal best dressage score of 23.50 to sit in second overall as the leading score for the U.S. team. Halliday-Sharp (Ocala, Fla.) and Deniro Z, the The Deniro Syndicate’s 10-year-old KWPN gelding, also put in an admirable performance, finishing the phase in eleventh with a score of 28.30. Coon (Ocala, Fla.) and Celien, Hallie and Helen Coon’s 11-year-old Dutch Warmblood mare would finish on a score of 33.90.

The Millstreet CICO3* served as only the second Olympic trial event in 2018 for the new competition format of three counting scores, which will be used at the 2020 Tokyo Olympic Games. With only three combinations competing for the Land Rover U.S. Eventing Team, all three scores for all three phases would count throughout the competition.

“The horse had a bit of bruising,” continued Duvander. “After dressage, the team vet evaluated him and it was decided that for this weekend, it was the best scenario not to run [Carlevo], as he is a future prospect for team competition and a very talented horse. It’s a minor injury, but you also want to be careful.”

With one combination down, the Land Rover U.S. Eventing Team put their best foot forward. Halliday-Sharp and Deniro Z put in a spectacular ride over Mike Etherington-Smith’s course, finishing in fifth on a 29.90. Though not a team combination, Halliday-Sharp would ride her other mount, Fernhill By Night, to the sixth place position just behind Deniro Z. Coon and Celien would slip to 48th with a score of 65.90. With the absence of Davidson and Carlevo, and the added penalties, the U.S. team sat in fourth after cross-country on a score of 319.30.

The show jumping phase would see Halliday-Sharp and Deniro Z finishing on a score of 41.90 with 12 faults, and Coon and Celien with a score of 73.90 and eight faults. Though they were out of the hunt early for a medal, The Land Rover U.S. Eventing Team finished on an overall score of 439.30, showing their grit and determination throughout the phases.