Wellington, Fla. – March 30, 2018 – Team USA continued their winning streak in style after claiming the gold medal in the team competition of the CDIO3* Nations Cup and Americans swept the all three medals in the individual Grand Prix Freestyle in the final Friday Night Lights performance of the 2018 Adequan Global Dressage Festival (AGDF). 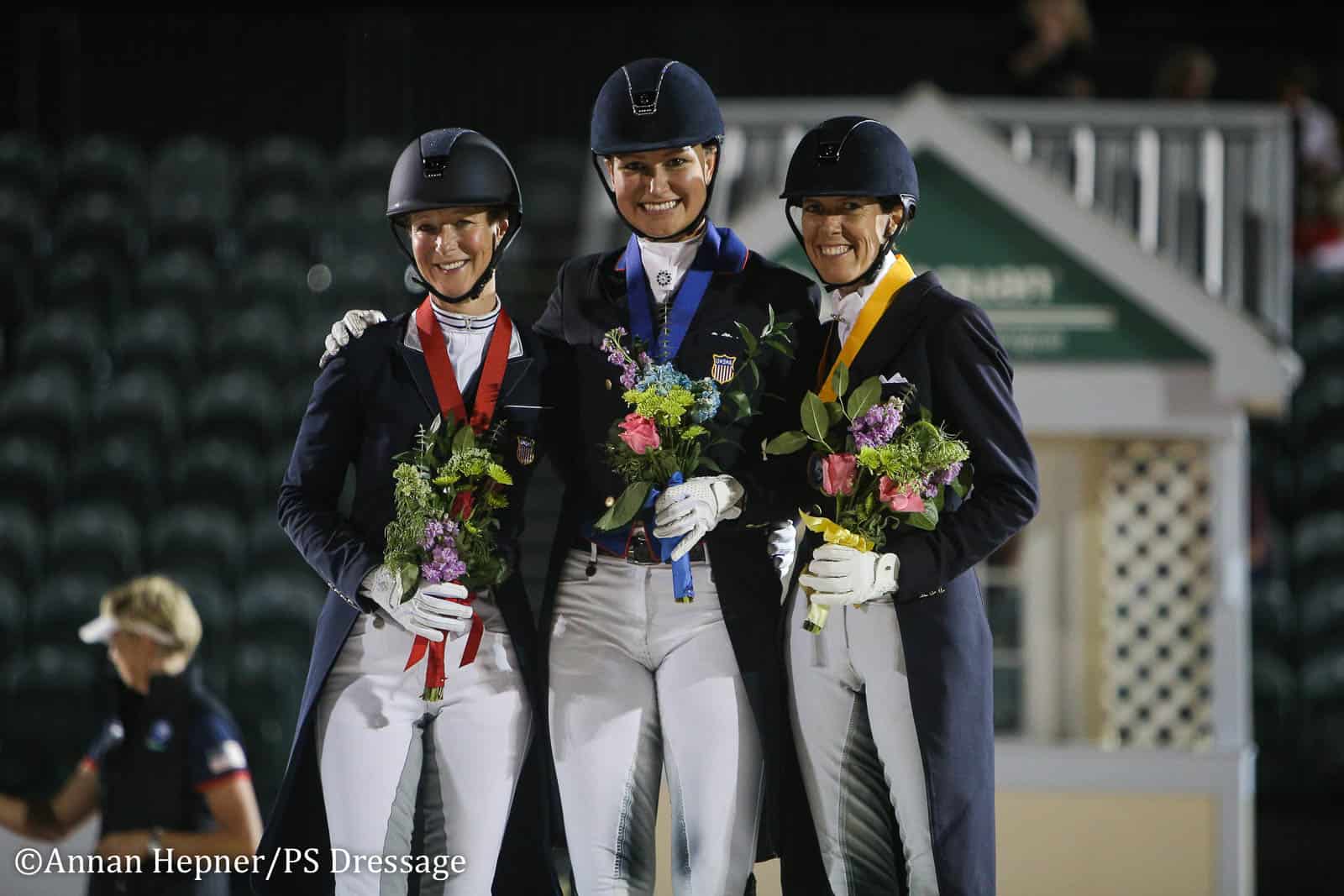 Securing the gold medal was Adrienne Lyle aboard Betsy Juliano’s 11-year-old Hanoverian stallion (Sandro Hit – Dynastie, Donnerhall) Salvino. This is only the second year the pair has competed in the Grand Prix ring and they did not disappoint. Lyle and the stallion dominated the entire weekend, earning the highest score in all three classes throughout the weekend. On the first day, the pair earned a score of 76.478 percent in the Grand Prix. Following that performance, Lyle and Salvino were awarded a score of 76.894 percent in the Grand Prix Special.

Not to be outdone by her previous scores, on Friday evening, the pair broke the 80 percent mark in the Grand Prix Freestyle to earn a personal best of 81.750 percent. This is the first time the Olympian has scored over an 80 percent and her second individual gold medal in a Nations Cup, having won the CDIO3* Grand Prix Freestyle in Wellington with Wizard in 2014.

Claiming the silver medal was fellow teammate Sabine Schut-Kery and Sanceo, Alice Womble’s 12-year-old Hanoverian stallion (San Remo – Rivera, Ramiro’s Son II) with a score of 78.145 percent. Coming all the way from Thousand Oaks, California, Schut-Kery and the stallion took second place all three days earning a score of 73.109 percent in the Grand Prix and a score of 72.872 percent in the Grand Prix Special for the team competition. This is the stallion’s first year competing at Grand Prix and he proved to be a strong contender for the World Equestrian Games during the past three days of competition. This is Schut-Kery’s first individual medal in a Nations Cup. As a member of Team USA during the Pan-American games in 2015, Schut-Kery and Sanceo competed in the small tour competition.

Rounding out the podium was Olivia LaGoy-Weltz aboard Lonoir, who claimed the bronze medal with a score of 77.385 percent. Coming off of an explosive performance last year in the Nations Cup where they placed seventh in the freestyle, the pair made quite a comeback to stand on the podium this year. To help Team USA claim team gold earlier in the week, LaGoy-Weltz and the 14-year-old Danish Warmblood gelding (De Noir – Lorani, Loran) placed third in the Grand Prix with a score of 72.804 percent and third in the Grand Prix Special with a score of 71.170 percent. This is the pairs fifth time competing on a Nations Cup team, in 2015 they rode in the small tour during the CDIO3* in Wellington. In 2017, they made the jump to the big tour and competed in the CDIO3* in Wellington, the CDIO5* in Rotterdam, and the CDIO5* in Aachen.

Adrienne Lyle – Gold Medal
On Her Ride Tonight:
“Everyone dreams of breaking 80 percent and it hasn’t really sunk in yet. I’m so proud of the feeling Salvino gave me in there and how hard he seems to be trying every time he comes out into the ring – it’s incredible. I’m so blessed to have him and to have my amazing owner, Betsy Juliano and the most amazing coach in the world, Debbie McDonald. It’s just been an amazing night with incredible teammates.”

On Her Freestyle:
“I think he’s getting to a place now where he’s a lot stronger physically. I can keep him up, and he’s able to maintain that power throughout it. This is actually a freestyle that we’ve borrowed from Wizard – it’s his old freestyle, and we’re in the process of creating a new one for Salvino with Terry Gallo. This one is improvised a little bit, we just took the old music and tried to make it fit his gaits as best we could, so I’m very much looking forward to having one created just for him.”

On Her Future Freestyle:
“The new one has a higher degree of difficulty. With the new floor plan system, its been interesting to type it in – and the new one we’re creating is significantly higher. The music is really phenomenal – it’s powerful music and it does a good job of showing his power and gracefulness.”

On Her Future Plans:
“We all have our sights set on WEG – so we’re going to continue our plan of trying to build his strength and his fitness. He’s at a place now where he understands the job and he understands the movements – a lot of it now is getting him in the right condition and keeping him happy mentally.”

Sabine Schut-Kery – Silver Medal
On Her Freestyle:
“I can only say that this horse is just starting in the Grand Prix and I couldn’t be any more pleased and happy with him. Just starting this year in Grand Prix and coming here and riding him tonight under the lights and pulling off that score – what can I say? It was great! So I’m super happy.”

On Sanceo:
“What makes him special is that I can just hop over here [to Florida] and compete him three days and take him in here and do this – that speaks a lot of who he is. For me the highlight is always how he rides in general – he’s very reliable and smooth. He’s really talented in piaffe/passage.”

On Her Future Plans:
“We’re going to continue to get him more experience and work to make him stronger in everything. I want to try to make it to the top eight to go to Europe and get some experience over there, as well as do some training, along with the showing.”

Olivia LaGoy-Weltz – Bronze Medal
On Her Ride Tonight:
“I was really, really happy with him tonight. This show has been really good for us – yesterday we pushed for a bit more and it didn’t go quite the direction we wanted, but tonight it did. He’s a hot strong tamale – there’s so much in there, getting it the direction I want it to go and doing it reliability. I was quite happy with him.

“He was very wild here last year, we had done Devon and that was just fine, he handled that quite well, but it was our second time doing the freestyle and the first time under lights, and we were very epically airborne for a good part of our test – it was not what I had been hoping for. So I think we really improved over last year and I’m super happy with that.”