Gladstone, N.J. – Oct. 2, 2018 – The capital of the United States will once again be filled with more than 500 of the world’s top horses and riders vying for half a million dollars in prize money as the 60th installment of the Washington International Horse Show (WIHS) gets underway Oct. 23–28. The United States Equestrian Team (USET) Foundation is honored to once again be the beneficiary of the President’s Cup Party at the WIHS on Saturday, Oct. 27. 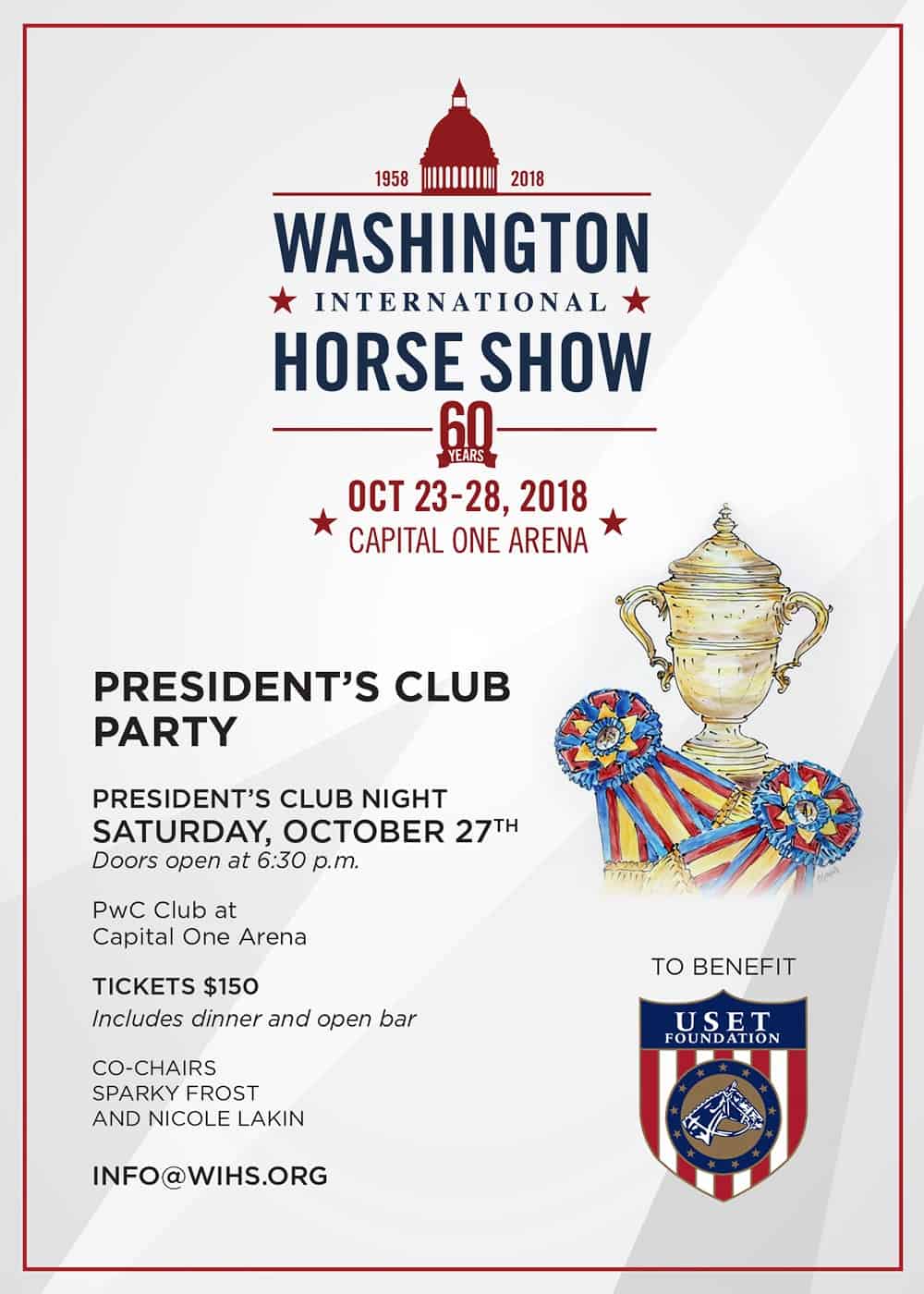 The highlight event of the week will be the prestigious and highly-anticipated $135,000 Longines FEI Jumping World Cup™ Washington, presented by Events DC, with the biggest, most challenging jumps and the largest purse of the show for the President’s Cup on Saturday evening. During Saturday’s world-class show jumping competition will also be the President’s Cup Party at 7 p.m. in the PwC Club at the Capital One Arena.

Other festivities included in President’s Cup Night, set to kick off at 6:45 p.m. are the Lindsay Maxwell Charitable Fund WIHS Equitation Finals, where top junior riders compete in the final work-off for the championship, the closing race in the Shetland Pony Steeplechase Championship presented by Charles Owen and Australian a performance by horseman and entertainer Guy McLean.

WIHS invites guests to wear their best equestrian chic and join Washington D.C.’s elite business, diplomatic and community leaders, as well as a number of Team USA Olympic equestrian athletes, for a night of socializing, sophistication and show jumping to benefit the USET Foundation.

Prior to the start of the $135,000 Longines FEI Jumping World Cup™ Washington, there will be a special recognition to honor the newly-crowned FEI World Equestrian Games™ Tryon 2018 gold medal NetJets U.S. Jumping Team and reigning Longines FEI World Cup™ Jumping Champion, Beezie Madden. The USET Foundation is the beneficiary that supports the incredible high performance programs that make these achievements possible.

Tickets to the President’s Cup Party include dinner and an open bar and provide a wonderful vantage point for watching the action in the ring — combining the excitement of top-level equestrian sport with exemplary hospitality.