Herning, Denmark – The U.S. Vaulting Team took to Jyske Bank Boxen today to begin competition at the ECCO FEI World Championships Herning 2022, opening the day as the second team to present a squad for the Compulsory Tests. The team also saw all five individual combinations take to the arena as well, with Kimmy Palmer, finishing as the highest placed U.S. athlete at the conclusion of day one.

In the Squad Compulsory, the Oak Hills Squad representing the U.S., finished in sixth place overall out of 14 teams, earning a 6.568 from the panel of judges. The team vaulted aboard Drillian, a 2008 Hanoverian gelding owned by Reitclub Blau-Weiß Löwenstedt. The Squad was led by Todd Griffiths (Elk Ridge, Utah), as the most tenured athlete on the squad, alongside his youngest daughter Miriam Griffiths (Elk Ridge, Utah), Calle Davis (Spanish Fork, Utah), Paula Hampshire (Kaysville, Utah), Jaynee Meyer (Salem, Utah), and Alyssa Stoddard (Eagle Mountain, Utah). The squad, who have really just started working together over the past two years after a club merger, were pleased with their performance on the first day of competition and felt confident with their horse and lunger, Selena Brummund (GER), right from the start of their training together.

“This was one of our best sets of the entire season, so we can be really proud of what we did out there. Everyone had one of their best efforts and it just felt fantastic,” said Todd Griffiths.

In the Individual Female Compulsory Test, Kimberly Palmer (Half Moon Bay, Calif.) and Rosenstolz 99, a 2007 Rheinlander gelding owned by Clup Ippico Monzese A.S.D. and lunged by Laura Carnabuci (ITA), impressed in their first appearance before the judges, receiving a 7.929, and placing them tenth, as the highest U.S. combination in the Mustang Corp. FEI World Vaulting Female Championship at the conclusion of the first day. Tessa Divita (Portola Valley, Calif.) and Sunday Song, a 2007 Hanoverian gelding owned and lunged by Lasse Kristensen (DEN), earned a 7.839 for twelfth, while Emily Rose (Santa Cruz, Calif) and Eldoctro, a 2009 KWPN gelding owned by Carolyn Bland and Emily Rose and lunged by Carolyn Bland (GBR), finished in seventeenth, after receiving a 7.570.

“Being in that arena really gives you strength because it’s kind of small and the lights and the people. It’s really empowering,” said Palmer. “This is my fifth competition with him and we get along really well and I try to be near him often so we have a good relationship. I really hope to score and place the highest I ever have and hopefully medal.”

Both Daniel Janes (Moss Beach, Calif.) and Jace Brooks (Eagle Mountain, Utah) also completed their first day of competition in the Individual Male Compulsory Test. Janes was the first of the two to compete, earning a 7.380 with Christmas PS Z, a 2013 Zangersheide gelding owned and lunged by Nienke de Wolff (NED) and finished in seventeenth, while teammate Brooks vaulted aboard Dwight, a 2004 Westphalian gelding owned by C.Kaag, and lunged by Maurits de Vries (NED), earned a 7.027, his best compulsory score in championship competition to sit in eighteenth. 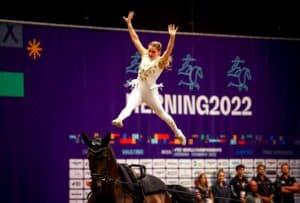 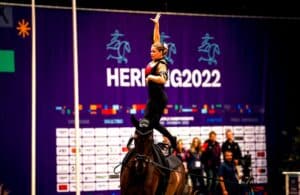 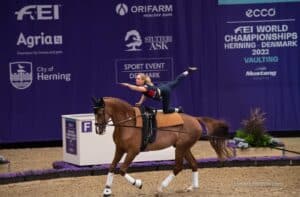 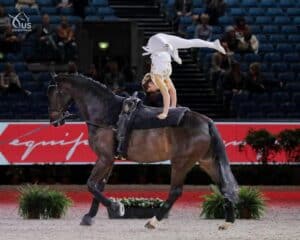