Le Mans, France – A talented group of U.S. youth athletes had strong performances at the 2021 FEI Vaulting World Championships for Juniors in Le Mans, France from July 29-August 1. The contingent of U.S. competitors in the individual female, pas de deux, and squad divisions delivered on the world stage under the guidance of Chef d’Equipe Emma Seely. The U.S. Squad took home the silver medal against a talented field, while their U.S. teammates put forth solid efforts in the individual female and pas de deux divisions.

“The U.S. vaulters did an awesome job. They did what they needed to do,” said Seely. “The squad got the silver medal, which was super exciting. The pas de deux pairs were good, and the individual women were awesome. It was a huge playing field, a lot of people in the competition, so I’m quite proud of what we were able to do coming out of a pandemic into this big event.”

The U.S. Squad was made up of Melanie Ford (Fort Collins, Colo.), Emma Milito (Brighton, Colo.), Augusta Rose Lewis (Longmont, Colo.), Rhianon Hampton (Greeley, Colo.), Giana Massaro (Costa Mesa, Calif.), and Bryleigh Thornton (Thornton, Colo.), and they showed poise beyond their years at the world championship. They partnered with longeur Jacqueline Lux and Goldjunge, Lux’s 2008 gelding, and began the competition with a compulsory test score of 6.697 and a free test score of 8.077 in round one. The squad finished on a high note with an excellent free test in round two to score 8.234. The overall score of 7.669 clinched the silver medal for the U.S. Squad.

In the pas de deux division, Persephone Brown (Brighton, Colo.) and Danica Rinard (Fort Lupton, Colo.) were the top U.S. pair in sixth place. Brown and Rinard teamed up with longeur Thordis Thoroe and Lightning Jack 12, Thoroe’s 2007 Holsteiner gelding. They scored 7.250 in the round one free test and 7.118 in the round two free test for an overall score of 7.184.

Peyton Daley (San Mateo, Calif.) and Aria Deshpande (San Francisco, Calif.) finished in 13th place in the pas de deux division. They partnered with longeur Carolyn Bland and Icarus, Nienke De Wolff’s 2013 KWPN gelding. They had some bobbles in the round one free test, scoring 4.567. They made a comeback with their round two free test to score 6.042, finishing on an overall score of 5.305.

The individual female division was massive with 56 competitors. Three U.S. athletes competed in the division: Hallie Dudley (Elizabeth, Colo.), Melanie Ford (Fort Collins, Colo.), and Kylynn Ghafouri (Murrieta, Calif.). Round one consisted of a compulsory test and a free test, and only the top 15 vaulters moved on to round two. Ghafouri with longeur Nienke De Wolff and Christmas PS Z, De Wolff’s 2013 Zangersheide gelding, finished round one in 22nd place on a score of 7.219, while Dudley with longeur De Wolff and Icarus finished in 24th place on a score of 7.151. Ford was the sole U.S. representative to move on to round two, sitting in 12th place on a score of 7.422.

By US Equestrian Communications Department Lexington, Ky. – US Equestrian is pleased to announce the nominated U.S. entries for the 2021 FEI Vaulting World Championships for Juniors to be held in

By US Equestrian Communications Department Lexington, Ky. – US Equestrian has announced the athletes nominated to the U.S. Vaulting Team Short List ahead of the 2021 FEI Vaulting World Championships for 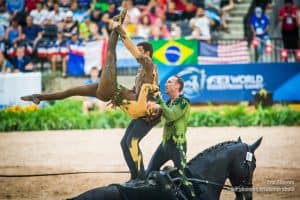 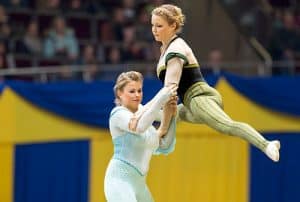 Dortmund, Germany – Cassidy and Kimberly Palmer put together a skillful and expressive performance to earn the pas-de-deux Bronze medal at the FEI World Cup™ Vaulting Final today. They finished