The Dutta Corp. U.S. Dressage Team took second place in the FEI Dressage Nations Cup™ USA CDIO3* on a final team score of 432.265, just narrowly edged by the German team who finished on a score of 433.337. The Canadian Team took third place on a final score of 409.091. The Dutta Corp. U.S. Dressage Team was led by Chef d’Equipe George Williams in their first outing of the 2022 season. The team was comprised of three large tour combinations and one small tour combination, with the large tour participants earning a 1.5 percent addition to their final scores in alignment with the CDIO3* Nations Cup format.

Ben Ebeling (Moorpark, Calif.) and Indeed, a 2008 Danish Warmblood mare owned by Vantage Equestrian, took the win in the class today, receiving a 73.649 percent from the judging panel in the FEI Grand Prix Special, helping secure the highest score for the team on the second day of Nations Cup team competition. The pair earned a 71.326 percent in the FEI Grand Prix yesterday to help keep them neck-and-neck with the Germans.

“One thing that I always find with the USA teams is that there is so much team spirit. There are team dinners, and we’re all laughing and having so much fun. Maybe it’s because I’ve grown up around it a little bit, but I’ve always felt the same way since I was a young child. A team like this gives a lot of really good experience,” said Ebeling. Of his mount Indeed, who is a newer ride for him this season, he continued, “She is so much fun. I love riding Indeed. I think it’s so much about my riding, but more about my coaching, from Christoph Koschel, and my dad, Jan Ebeling, who did a fantastic job training this horse. I’m just lucky that I get to ride her. She’s got a lot of power in there and today you could really see it and I really felt it. For me, that’s something that I’m really excited about.”

In their first senior team appearance, Bianka Berktold (Loxahatchee, Fla.) and Imperial, her own 2013 Dutch Warmblood mare, impressed in their debut, earning a 72.676 percent in the FEI Intermediate I today, after receiving a 72.441 percent in the FEI Prix St. Georges yesterday to take first in the class. The pair earned high marks from the panel in both tests, including several eights to reward their walk tour and final salute.

Aboard Kylee Lourie’s Quartett, a 2007 Brandenburg gelding, Kate Duerrhammer (Greenwood Village, Colo.) produced a solid score for the team in the FEI Grand Prix Special today, receiving a 70.521 percent from the judges. Yesterday, after a significant rainfall which caused a delay in the competition, the pair closed out the first afternoon of competition with a 71.652 percent in the FEI Grand Prix to keep the team in reach of the top two podium positions.

Susie Dutta and Don Design DC, a 2010 Hanoverian gelding owned by Tim Dutta, persevered through a delayed start to their FEI Grand Prix test yesterday due to the inclement weather to secure a 69.587 percent for the team. The pair showed off strong piaffe and passage work and earned consistent scores in their trot tour. In the FEI Grand Prix Special, Dutta and Don Design DC laid down another consistent test in the heat of the afternoon, but the pair were unfortunately eliminated following their post-test inspection by the stewards as a trace amount of blood was found. 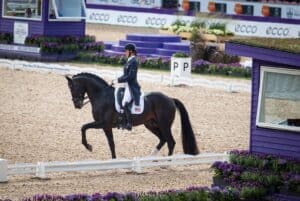 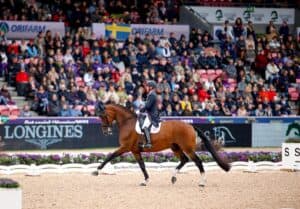 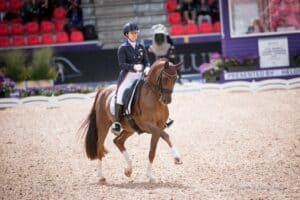 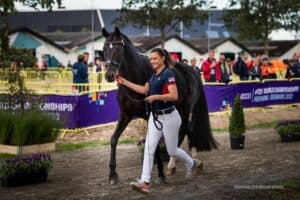 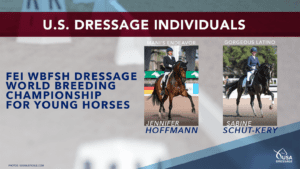 By U.S. Equestrian Communications Department US Equestrian is pleased to announce the two athlete-and-horse combinations selected to represent U.S. Dressage at the 2022 FEI WBFSH Dressage World Breeding Championships for