Paris, France – April 15, 2018 – Following McLain Ward’s triumphant victory in 2017, the USA claimed back-to-back Longines FEI World Cup™ Jumping Final titles on Sunday as Beezie Madden and Breitling LS were named this year’s champions. After winning the first two phases of competition on Thursday and Friday, the pair finished the final day atop the podium next to fellow American Devin Ryan, who captured second place during his World Cup Finals debut aboard Eddie Blue.

Coming in to Sunday’s two-round competition as the only combination with no penalties to their name, Madden and Abigail Wexner’s 11-year-old Dutch Warmblood stallion (Quintero–Armonia, Acord II) Breitling LS finished on a total score of 4 penalties over the course of five rounds of jumping throughout the three-phase competition.

Course designer Santiago Varela of Spain, who was just announced as the official course designer for the 2020 Tokyo Olympic Games, tested athletes over two rigorous and technical 1.60m tracks to complete phase three of the individual championship. Returning in reverse order of Friday’s phase two overall standings, the top 29 horses and athletes competed over the first round course with the intent to qualify among the top 20 combinations to advance to the second round.

It all came down to the wire at the end of the second round, when Ryan and Eddie Blue (VDL Zirocco Blue–Silvana, Marlon), owned by LL Show Jumpers, LLC, jumped one of Sunday’s two double-clear rounds to maintain their tally of 6 penalties from phase two.

Jumping clear in the first round and sitting in second place with 4 penalties from phase two was Sweden’s Henrik von Eckermann and Toveks Mary Lou (Montendro–Pina-Colada, Portland L), owned by GT Elite Scandinavia AB. The pair returned as second to last to go and lowered the height of one fence for an overall score of 8 penalties, which allowed for Ryan to slide ahead of Eckermann in the standings prior to Madden’s final round.

Following Eckermann’s round, it was finally Madden’s turn in the ring. With six points difference between her and Ryan, there was not as much pressure on the Olympic veteran to finish clear, however, there was still very little room for error.

Spectators at the AccorHotels Arena sat on the edge of their seats as the pair began their course — the determining round of this year’s overall winner. A unanimous gasp could be heard from the crowd as Breitling LS brushed the top rail of the B element (a vertical) in the triple combination for 4 faults. Yet, they did not let that rail disrupt their focus and jumped the remaining nine efforts clear for a final score of 4 penalties and the title of 2018 Longines FEI World Cup™ Jumping Final champions. This marks Madden’s second World Cup Finals victory after first winning in 2013 aboard Simon in Gothenburg, Sweden.

Ryan and Eddie Blue, who was the youngest horse competing at this year’s finals at 8 years old, secured the second place spot on the podium to conclude their first-ever World Cup Finals experience, while Eckermann settled for third place once again after also finishing third in 2017 in Omaha, Nebraska.

Although Madden’s journey with Breitling LS, which began in 2013, has not always been the easiest, including breaking her collarbone after falling off the stallion in 2014 competing at Old Salem Farm, Sunday’s victory during Breitling LS’ World Cup Finals debut is a testament to her meticulous training program and ability to develop young horses into top show jumping athletes. With this win, Breitling LS has undoubtedly moved up in Madden’s top string of horses as one of her most reliable grand prix mounts.

Finishing in fourth place was fellow American and 2017 World Cup Finals champion McLain Ward aboard HH Azur with a total of 16 penalties, while other top placing U.S. athletes consisted of Alison Robitaille and Jamie Barge, who placed 14th and 16th, respectively, overall. 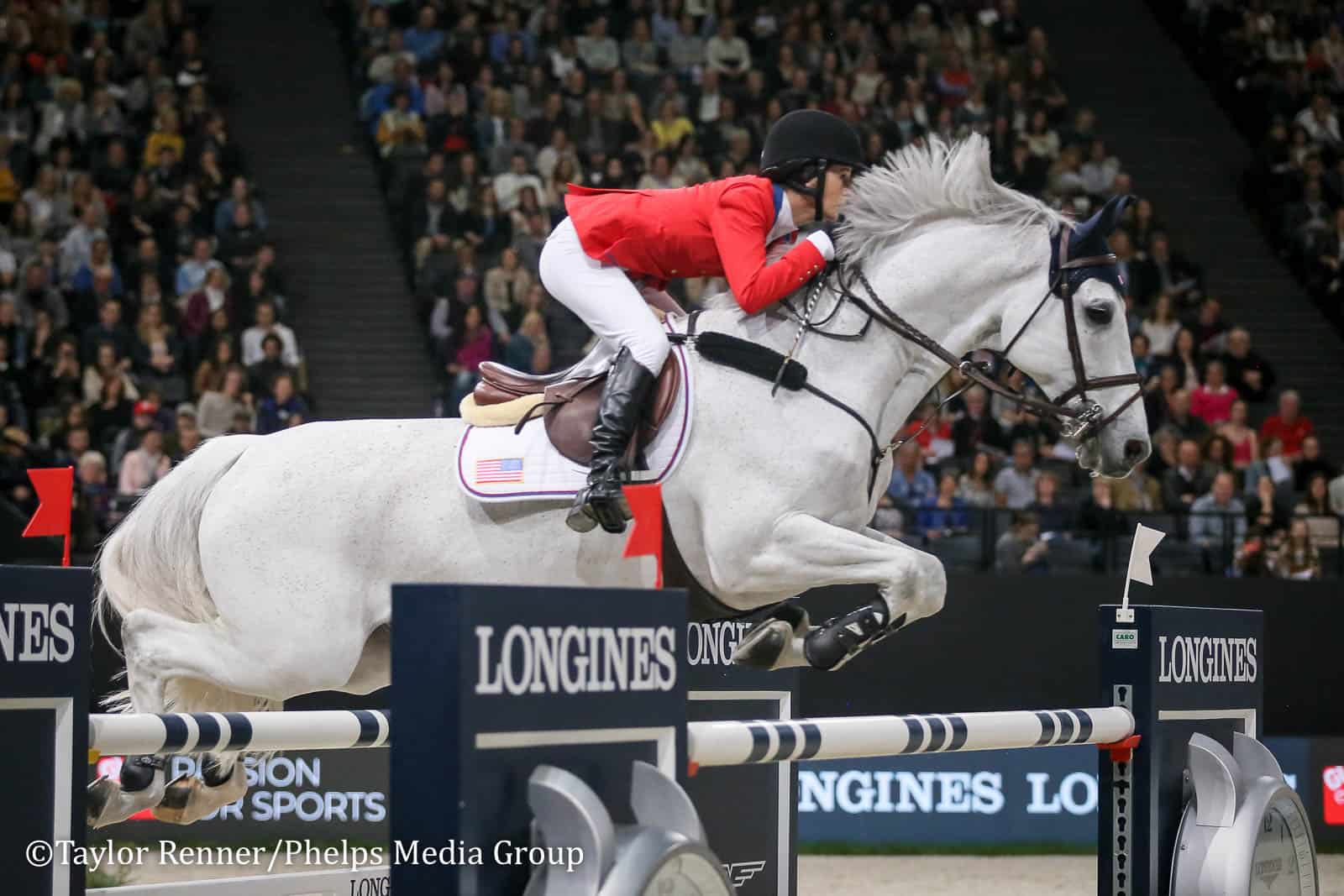 On her second World Cup Finals win:
“I’m very excited. It’s always exciting to win a championship and to have two of these is pretty amazing. I won in 2013 and to win here with a horse we really believed in was amazing. He took a little while to mature so for him to come through today was fantastic. I’m so happy the owner, Abigail Wexner, was here today to see this. I’m so happy for her and for the rest of my team — my husband, John — and the horse especially. What a fantastic week for the Americans with three in the top four.”

On her rail in Sunday’s second round:
“[I felt] a little nervous, but I still felt my horse was jumping well. All you can do at that point is pull it together, finish on 4 [faults] and try to get it done.”

On the World Cup series:
“I love the World Cup. It’s the annual championship so each year it’s a goal to get here and to win. I think it’s really important to keep the championships going like this. I hoped to do well but certainly didn’t expect it. To have [Breitling LS] dig in and do well today in a championship format — he really proved himself. If I hadn’t [competed him], I wouldn’t know that he’s actually capable of jumping at this top level.”

On developing Breitling LS from a young horse:
“If it was just jumping ability it would be easy for us to all pick horses and bring them along, but there’s so much more that goes into it. I really believe that temperament is a big part of it so I tend to pick [horses] with good temperaments. I tried [Breitling LS] as a 7-year-old and when we bought him we were very excited about him. He did really well in the young horse classes, but the consistency was lacking for the first few years when he was 9 and 10. Now, the last few years as an 11 and 12-year-old, he’s really become consistent and my go-to horse to win grand prix classes with. This was his first championship. He’s stepping his way up the ladder in my string.” 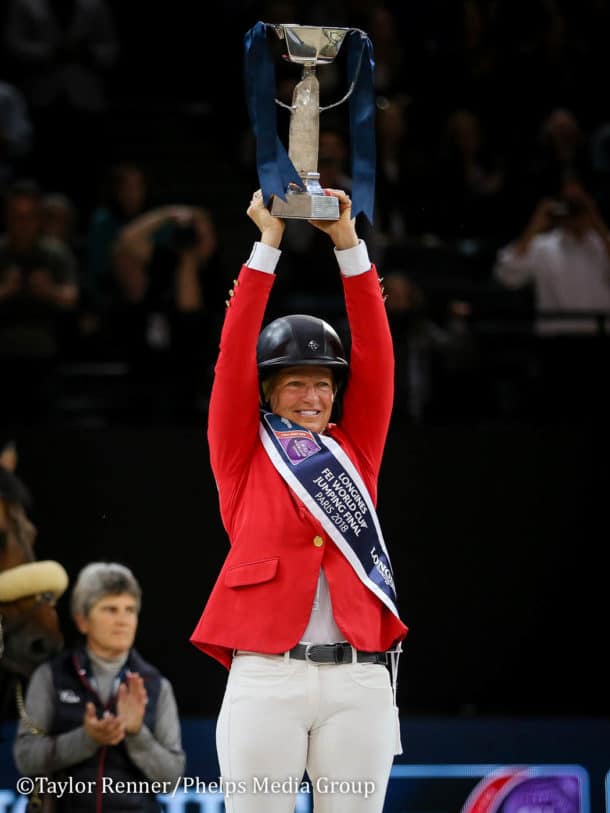 On breaking her collarbone with Breitling LS in 2014:
“He was only 8 years old at the time and made a bit of a green mistake, but he’s matured since then. He was a little bit of a spooky horse in the beginning, which kind of plays in my favor now because spooky horses tend to be conscientious and pay attention to things. He’s really just developed into that — his weakness has become a strength.”

On placing second in his first-ever World Cup Finals:
“To be second behind Beezie — she is a legend in our country. I’m still learning; this is my first championship so it’s fantastic. I’m proud to be an American today and I’m proud to be right alongside Beezie. Last year, my goal was to qualify for World Cup Finals on the East Coast and I got it done. Then, my goal once I got here was to hopefully be in the top 10 and make our [World Equestrian Games] shortlist; I think that might have happened today. I’ll take it one day at a time and see what happens. I’m sure they’ll put together a great team for the WEG and it will be a success.”

On Eddie Blue:
“He jumps a lot of clean rounds. He won the 5-year-old and 6-year-old finals in the United States and won five grand prix events last year. He won his first grand prix as a 7-year-old coming out of the end of the season so I think he has a good track record. He’s a very careful horse.”

On the American athletes’ performances at the World Cup Finals in Paris:
“It is unreal. This is a follow-up from winning the World Cup Finals last year. To be honest, what is so special about this is that all 10 riders that went into that arena did such a great job. This is what we are all about. To see this level of commitment and dedication and have it work out at the championship level is very exciting. This wasn’t just one rider, not just three in the top four, it was the whole group. It’s pretty unprecedented. I have made World Cup Finals a big priority. I have always felt it is important. We dominated the World Cup back in the 80s and we lost our domination for a lot of years. We have now won four out of the last seven, starting with Rich Fellers back in 2012 and it’s great to be back. This annual competition is very important for our sport. It’s important for us, our sponsors and important for our fans to see where we are on the world stage.”

On Devin Ryan’s performance:
“Devin had not ridden internationally until last year at the [Longines Masters of Paris]. I did select him as a rider there because I have been following him like I do with all of the up-and-coming riders. He ended up having the best round of the entire competition. It showed me a lot about his ability to cope under pressure and get the job done. What he did this week was not a big surprise to me. Eddie [Blue] has a heck of a record and has been jumping well.”