Patience is a virtue for any dressage rider, but Adrienne Lyle has lived that adage more than most.

Adrienne became fascinated with dressage because of its complexity. “It is a sport that you can work at your entire life and still learn something new every single day,” she says. “What I love most about it is how it merges the physical and mental aspects of horses.”

Since making it to the 2012 Olympic Games with Wizard, Adrienne has had to wait years for her next turn in the spotlight.

After Wizard retired in 2015, Adrienne took some time off to search for her next partner. Eventually she found Salvino, a Hanoverian stallion from Spain currently owned by Betsy Juliano, and saw something special in him. Adrienne spent the next two years out of competition, hard at work getting to know Salvino and getting him strong and confident enough to perform at an elite level.

This year, the Tokyo Games could be Adrienne’s chance to get back to the top of the sport — and maybe even onto the podium.

Finding Salvino was not easy. In fact, it took no fewer than four trips to Europe. But in May 2015, Adrienne was introduced to the stallion.

Salvino was 8 — a little bit older than Adrienne would have liked for starting a partnership — but she decided to take a chance.

“When I saw him the first time, I thought to myself, he is very special. I loved his scope, power and suppleness,” Adrienne told Dressage Today magazine.

Then, the real work began. Back home in Wellington, Fla., horse and rider spent several months making sure they had a strong foundation and spoke the same language. “Everything from simple transitions to half halts — everything every rider does slightly different — making sure he had a very clear understanding of what I wanted,” Adrienne explained. 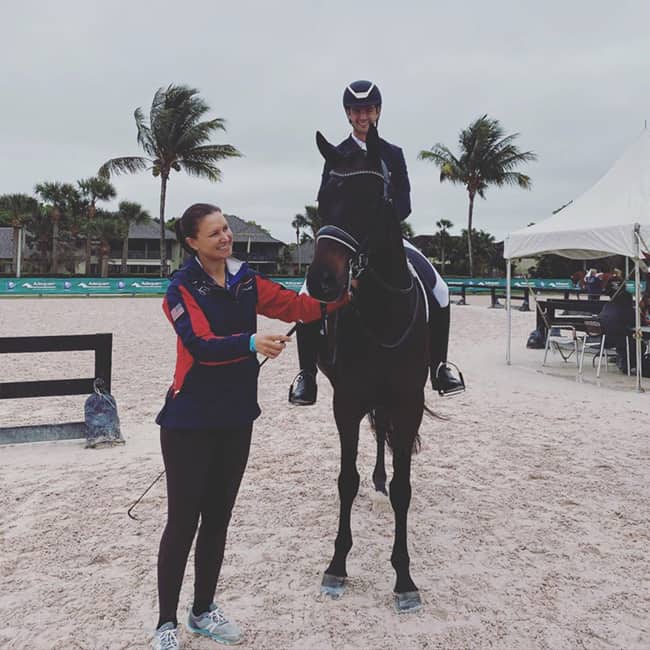 Due to the stallion’s conformation and natural talent, Adrienne and her mentor, Debbie McDonald, knew Salvino’s competition debut couldn’t be rushed.

“He’s such a big, powerful, scopey horse with such a range of motion that it took him a long time to get his strength,” Adrienne told Dressage Today.

After months of intense work together, Adrienne and Salvino made their international debut in 2017 at the Adequan Global Dressage Festival. It was Adrienne’s first international appearance since 2014, and it would mark the beginning of a very promising partnership.

At the Global Dressage Festival, Adrienne and Salvino took home third place in the Nations Cup Grand Prix and first place in the Grand Prix Special. After that, they spent the summer in Europe, competing at some of the top dressage shows in the world.

Since then, the duo has been on a roll. In 2018, Adrienne and Salvino were on the silver medal team at the World Equestrian Games in Tryon. Last year, Adrienne and Salvino tied for eighth place at the FEI World Cup Finals — a debut for both of them — and finished fifth at the World Equestrian Festival CDIO5* Grand Prix Freestyle in Aachen, Germany, with a career-high score of 83.65% for Adrienne.

“We enjoyed an easy fall of fun work and trail riding to give Salvino a nice mental break after such a busy summer,” Adrienne says. “We’re back in Wellington now, and training is in full swing as we get ready for our first competition of 2020.”

Adrienne’s goal is simple, though certainly not easy: to be selected to go to Europe as part of the U.S. dressage team this summer, then to be named to the Olympic team.

“The Olympics is always my top priority and my main goal,” Adrienne explains. “Every day, you have to make sure every decision you make aligns with making you prepared and focused for the Olympic selection process.”

That includes planning her horse’s routines, staying true to her own physical fitness routine and managing time impeccably.

“It’s about a lot more than just practicing the dressage moves,” she says. “I like to hack out on a long trail ride once a week, do one day of conditioning work in our big jumper ring and use the aqua treadmill twice a week for the horses. This work not only keeps the horses physically fit, it also keeps them mentally happy by adding variety to their routines.”

Most important, Adrienne says, is putting the horse first.

“Never compromise on your training principles and ethics. You must be your horse’s advocate and always make their welfare a priority,” she says. “At the end of the day, the chips will fall where they will, but you will always know you did your best and did right for your horse.”

As she focuses on doing everything she can to make it to Tokyo, Adrienne is mindful of how many people it takes to get horses and riders to the top of the sport.

“The U.S. Equestrian Team Foundation has an incredible impact,” she says. “They help make it possible for driven and talented athletes to excel in this sport when they wouldn’t otherwise have the financial means. Without the work of the Foundation, dressage would not be as strong as it is in our country today.” 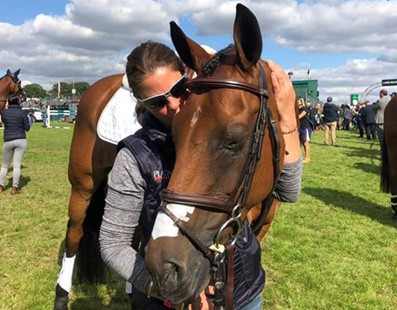 After more than two decades, she’s still finding ways to keep the equine athletes she adores, happy, healthy and performing like champions. 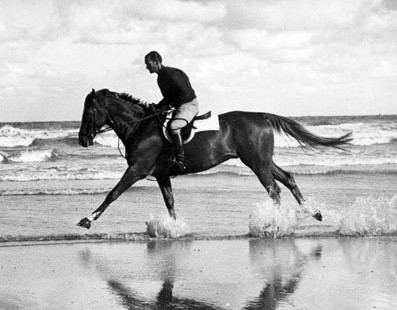 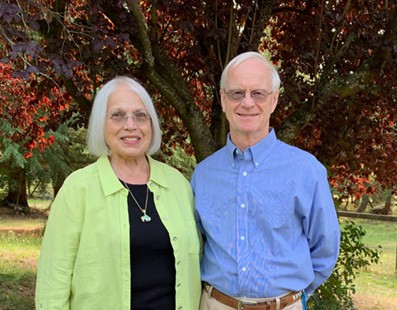