Gladstone, N.J. – May 18, 2017 – The energy level is high at the United States Equestrian Team (USET) Foundation Headquarters in Gladstone, New Jersey, as riders earn the first scores for the coveted national championship titles. In the large Prix St. Georges class, it was Jane Cleveland and Monique, an 8-year-old Danish Warmblood mare, who came out on top with a score of 70.789 percent.

“I had a great test and it was great fun!” Cleveland said. “Monique felt as good as she ever does. She knew that it was important and she did so well.”

Cleveland expressed pride in the talented mare that she purchased off a video from the Danish foal auction, and she believes that their success as a team has a great deal to do with her own involvement in Monique’s upbringing and training with Nicholas Fyffe of Marcus Fyffe Dressage.

“Monique came to me when she was weaned and grew up in Tennessee,” Cleveland explained. “I’ve been in her life, and done the work with her all the way along. It’s incredibly rewarding. We have a very good relationship because of that and we know each other very well.”

“I could not have asked for anything more of him today,” Lyle said. “I think that was the most honest he’s felt in the ring, and he’s one that we’ve done everything with.

“We found [Harmony’s Duval] as an unbroke 5-year-old in a field in Colorado,” Lyle explained. “I am really thrilled with him. We haven’t shown at many places, so you don’t know how they are going to handle it when you come in, but he was super.

“It’s a close horse race still,” she continued. “These top horses are all incredible horses and great riders and the scores were all close, so it is going to be a fun weekend to see how it all plays out.”

“I was really pleased with my horse and pleased with my test,” Baumert said. “It’s his first time here, and we haven’t shown in many venues. I wasn’t sure what to expect, but he was just right there for me and I was very proud of him.” 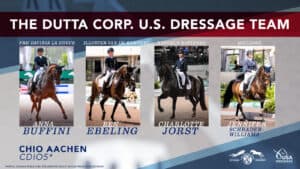 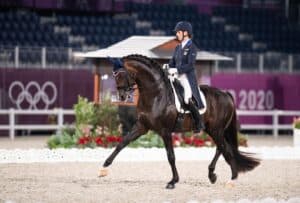 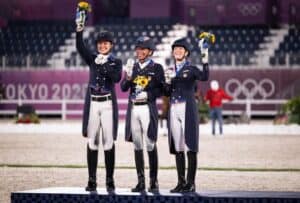 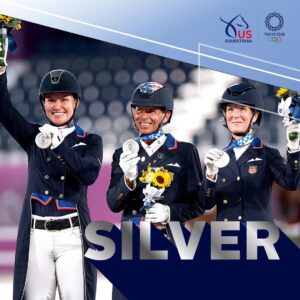