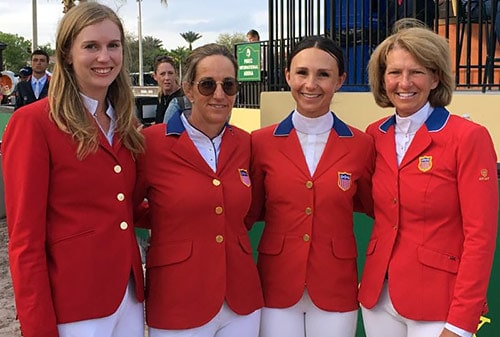 Leading off for the U.S. was Bloomberg (New York, N.Y.) with Gotham Enterprizes, LLC’s Lilli, who set a positive tone for the evening, jumping clear over the Steve Stephens-designed track. Riding in only her third Nations Cup, Coulter (San Francisco, Calif.) followed suit with Copernicus Stables, LLC’s Capital Colnardo, and produced another score of zero for USA. Kraut (Royal Palm Beach, Fla.) entered the arena next with Old Willow Farms, LLC’s Zeremonie and sealed round one with another clear round. The clear efforts of the first three U.S. combinations deemed it unnecessary for anchor rider Madden to jump.

The U.S. team was not able to breathe easy entering round two as Ireland sat tied on zero faults and Mexico was a close third on five faults. The round proved to be a close contest with the final result resting on the anchor riders. Bloomberg began round two with an eight-fault effort, but both Coulter and Kraut jumped clear.

Ireland’s first three riders jumped two four-fault rounds and a clear. As penultimate in the order, Madden (Cazenovia, N.Y.) and Abigail Wexner’s Simon had an uncharacteristic misstep at fence three that resulted in the pair’s retirement on course. With Ireland’s anchor rider going clear, the Irish won on a two-round total of four faults.

“We felt really confident coming in and felt good after the first round. We had a really good night; it was just a tough way to end. That’s show jumping though, that’s sport,” said Chef d’Equipe Robert Ridland.

The U.S. team showcased great up-and-coming talent this evening with Coulter marking the first double-clear performance of her career with her efforts.

“I have been on teams before, and this was the first time I’ve been able to come back for the second round. To jump double-clear was really special,” said Coulter “He was a little nervous in the first round, and then in the second, he took a breath a really performed well.”

Kraut’s mount Zeremonie was contesting her first Nations Cup and performed beautifully under the electric atmosphere, producing the second double-clear effort for the U.S.

The U.S team will all move forward to compete in Sunday’s $216,000 Lugano Diamonds CSIO4* Grand Prix.