Gladstone, N.J. – Feb. 25, 2016 – The United States Equestrian Team Foundation is proud to announce that Caroline Martin and Jenny Caras have been named as the  recipients of the 2016 Karen Stives Endowment Fund for High Performance Eventing Grant. Martin and Caras will participate in the Karen Stives European Developing Tour, which will give these U25 athletes a chance to represent the United States on an international stage at the 2016 Rockingham CIC and Bramham International CCI3*-U25 in Great Britain.

Established with a generous $1 million gift from Olympian Karen Stives, the Karen Stives Developing Tour aims to encourage up-and-coming eventers in the USEF’s Developing Rider Program to step up and prepare themselves to represent the United States internationally in the future, strengthening the pipeline of qualified riders to create future medal-winning teams. 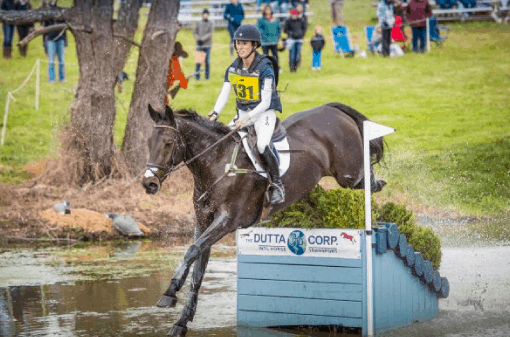 Under the mentorship of British Olympian Leslie Law, the two developing riders will spend a month in Great Britain furthering their education and gaining valuable competition experience.

“I’m just in awe of the generosity that everybody has shown me and the faith that they’re putting in me by awarding me this money,” said Caras. “It’s kind of a dream come true that I have people believe in me enough to put their faith behind me. I think this opportunity will make a world of a difference for my career.”

Caras, who trains with Phillip Dutton, will be bringing her 12-year-old Irish Sport Horse Fernhill Fortitude, or “Forty.” The proven pair claimed a number of top finishes at 3* competitions in 2015, including fourth place at Bromont and sixth place at Jersey Fresh. Aside from being the highest-placing young rider at Fair Hill, Caras and Forty were one of only nine horse-and-rider pairs to go double clear in the rigorous cross country phase.

Martin, who has trained with Buck Davidson for the past six years, will compete with Center Stage [Connor], her 10-year-old Holsteiner. In 2015, the duo placed fifth at the Richland Park CIC3* and had clear rounds at the challenging Fair Hill. The 21-year-old rider competed at the Bramham U25 in 2015 with her horse Quantum Solace, who will be competing at Rolex this year, and is grateful for the opportunity to return with Connor in a team setting.

“Karen Stives was a fierce competitor, so being named to this grant is a huge honor. It’s especially great to do it on a horse that I produced up the levels,” Martin said. “This trip isn’t just about competing; it’s about making us better horsemen. This is going to improve us drastically. We’re going to learn under the pressure of representing the United States, so it’s a good preparation for the next step, which would be competing on the senior team.”

No strangers to competing in a team setting, Martin and Caras were both a part of the 2013 Young Riders gold medal eventing team. Martin also won the individual gold medal, while Caras took home the bronze medal.

“We’re pretty good friends, so this is going to be a lot of fun,” Caras said.

Fun aside, the Bramham CCI3* is widely regarded as the toughest level of U25 eventing competition, and therefore will serve as an invaluable learning opportunity for the talented riders to put their abilities to the test.

“We’re really fortunate that we have this grant because the Bramham U25 is the highlight for U25 riders in the world,” Martin attested. “This is the most important competition we have. Sending U25 kids from the states over there to compete against the world will show us how good we are and how much we need to push ourselves. We need this so that we know what we need to work on for the future, because hopefully, at some point, Jenny and I will be on teams together.”